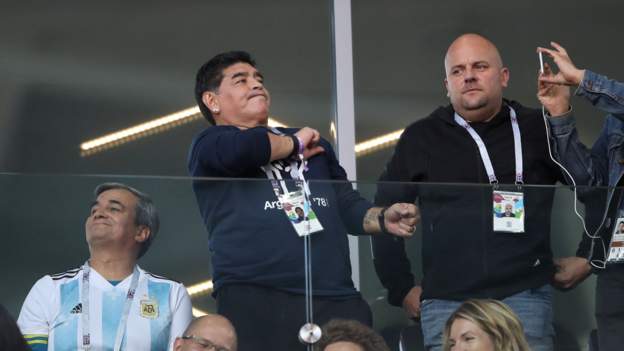 Argentina legend Diego Maradona has backed his compatriot Lionel messi amid criticism over his missed penalty during their 2018 FIFA World Cup opener against Iceland on Saturday.

The Albiceleste, acclaimed favourites of Group D, were held to a 1-1 draw by debutants Iceland who put up a spirited fight against them at the Spartak Stadium in Moscow in Russia.

With Sergio Aguero’s opener having been cancelled by Alfreð Finnbogason’s leveler, Argentina were presented with a clean opportunity to take the lead when Messi was brought down in the box in the 64th minute.

The Barcelona forward stepped up to take the spotkick and wasted it as goalkeeper Hannes Halldorsson – the most valuable player in the game – pushed away the penalty.

But Maradona, one of the best players the sport has ever known, says Messi cannot be blamed for Argentina’s failure to win the game.

“I cannot blame the players, let alone him (Messi),” TodayNG quotes Maradona, who was on the stands during the encounter, as telling Tyc Sports.

“I cannot blame him for not working, I do not blame the players, least of all Messi who gave everything he had to give.

“I missed five penalties in a row and yet I was Diego Armando Maradona!”

Argentina will hope to reboost their chances of advancing from the group when they face Croatia in their next game on Thursday.

Croatia are currently top of the group after they defeated Nigeria 2-0 later on Saturday.