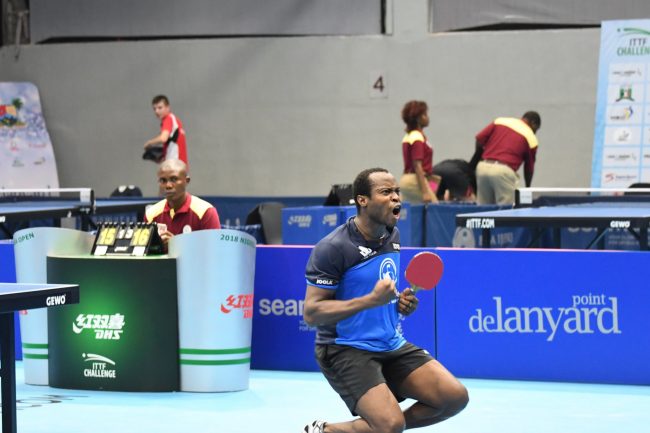 Top seed Aruna Quadri is the only Nigerian that advanced to the semifinals of the Singles events after easing past Kazeem Makanjuola and Sipos Rares on Saturday.

Aruna defeated his compatrot Makanjuola 4-0 in their round of 16 match on Saturday morning, before sealing his place in the last four by seeing off Sipos in another four straight sets in the evening.

A total of six Nigerians made it to the round of 16 in both the Men’s and Women’s Singles categories, but Aruna is the only Nigerian player that will feature on the last day of the competition.

Five-time Olympian Olufunke Oshonaike and Cecilia Akpan failed to advance from the second round in the Women’s Singles, seven-time Olympian Segun Toriola and Jamiu Azeez Olugbenga also crashed out in the Men’s Singles round of 16.

Oshonaike was beaten by an unranked Chinese player Fan Siqi 4-1 in their round of 16 match, even as Cecilia could not match up with Hungary’s Pergel Szandra who also won 4-1.

Last man standing, Aruna will take on WISUTMAYTHANGKOON Supanut of Thailand in the semifinals, and if victorious, would battle for the title against Gavin or France’s Hachard Antoine in the final.

The $46,000 prize money competition, which kicked off on Wednesday, will come to an end on Sunday.

The men and women’s doubles finals and the men’s and women’s singles semis will come up on Sunday morning, while the finals of the Singles events will take place on Sunday evening.