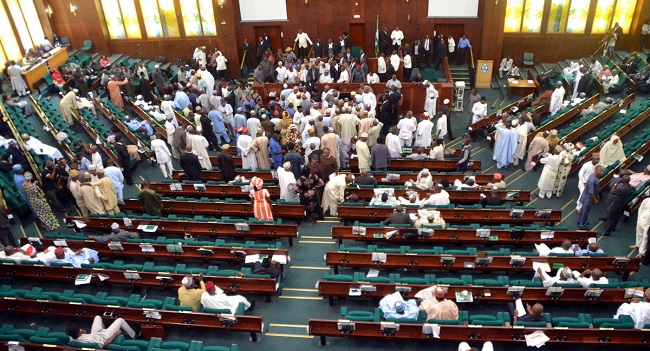 The House of Representatives Committee on Public Petitions has accused the security agencies of human rights violations during the COVID-19 lockdown.

The Chairman of the committee, Jerry Alagbaso accused the police and non-state actors like State COVID-19 task forces and the Nigerian Army as the top violators of human rights as contained in the documented report by the National Human Rights Commission.

The chairman made the remarks during an experience sharing session on the “Administrative injustice arising from COVID-19”, organised by the Policy and Legal Advocacy Centre with support from the European Union.

Also, the lawmaker said the Department of State Services and the Nigerian Security and Civil Defence Corp were indicted for violating human rights while enforcing the pandemic rules and regulations.

Alagbaso explained that the violations included arbitrary arrests and detention of citizens and even those who had cogent reasons to go about their official duties during the COVID-19 lockdown period.

He said apart from harassment and illegal detention of journalists by security agencies, there were also several instances of illegal arrests and detention of ordinary citizens and others who were pushed by hunger in search of food and sources of income.

According to the lawmaker, the Committee on Human Rights Abuses has handled cases concerning administrative injustices. And at investigative hearings, the Committee’s position as regards the violation of human rights is always made clear to the heads of the security agencies.

He continued: “We have always pointed out the dangers in the abuse of human rights. Another issue is that of extra-judicial killings. The NHRC documented more than 11 extra-judicial killings between April and May 2020 committed by the security agents while enforcing the COVID-19 lockdown as well as other non-state actors.”

Meanwhile, the Executive Director of PLAC, Clement Nwankwo, explained that the event aimed to gather data on lessons learnt from COVID-19 and the recommendations to improve the socio-economic well-being of vulnerable groups.

The session, however, made recommendations on legislative committee interventions that will protect the rights of women in public emergencies.

The lawmaker further stated: “The NHRC report showed that out of the 11 documented deaths, four were recorded in Abia state, two in Delta State, while Niger, Jigawa, Lagos, Anambra, and Rivers states recorded one death each.

“The report also stated that during the COVID-19 lockdown, the police accounted for 29.6 per cent of the total violations, followed by individuals and non-state actors and gender-based violence which accounted for 18.3 percent.

“The report pointed out that the various task forces on the enforcement of COVID-19 regulations across the country accounted for 10.5 per cent of the cases, while the Nigerian Army and Nigeria Security and Civil Defense Corp accounted for 7.7 per cent and 1.9 per cent respectively of the violation.”

He added that the DSS also accounted for one per cent of the total cases of violations.

Alagbaso said the cases of the arrests were rampant to the extent that even journalists who render essential services were arrested and detained by the police illegally.

The lawmaker bemoaned the overzealous nature of some uniform personnel in the course of carrying out their duties, calling for a change in attitude.

The session also heard from participants how the Covid -19 pandemic exposed grievous corruption in the country as claims by the government of putting in place the critical infrastructure to the effect was not realistic.

The issues also highlighted were those of domestic and sexual violence which increased during the lockdown as observed by civil society groups and Non Governmental Organizations.

Why APC is patient, taking its time over congresses —Gov Sule