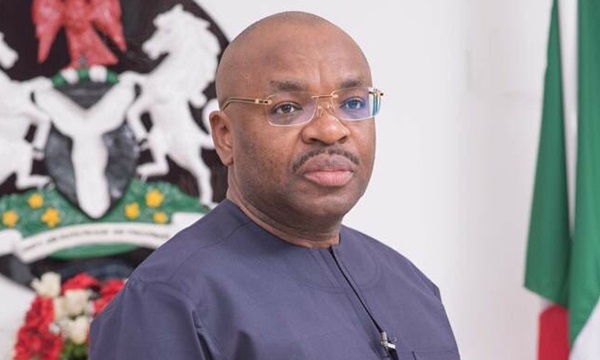 The governor threatened to institute a legal action against Barr. Leo Ekpenyong, who made the allegation.

He gave the lawyer seven days to substantiate his allegation with evidence or face a lawsuit.

The lawyer had in an interview with a local tabloid in Uyo alleged that Gov Emmanuel doled out 1.5million dollars to the panel chairman in the petition filed by Godswill Akpabio challenging the election of Chris Ekpeyong.

According to him, “Justice W. O. Akanbi, who many thought was a righteous Judge, has received a whopping $1.5million US Dollars from governor Udom Emmanuel and has recruited one Justice Ebetu, another Judge from Bayelsa state to join in the justice-for-sale scam.

“Akanbi has clearly jettisoned justice in preference for governor Udom’s Greek gift, since, according to him, he (Akanbi) has only two years to retire”.

However, Governor Emmanuel, speaking through his Attorney-General and Commissioner for Justice, Uwemedimo Nwoko, described the allegation as completely bereft of truth.

He said if the barrister failed to back up his claims with evidence and publish same in three reputable national newspapers within seven days, he would be made to face the full weight of the law.

The statement by the attorney general reads in part, “We state most categorically and without any equivocation that there is absolutely no scintilla of truth in Leo Ekpenyong’s wild and unsubstantiable allegations. His Excellency, Governor Udom Emmanuel does not know and has never met Honourable Justice Akanbi or any other Judge on the Panel.

“His Excellency, has made no personal contact or through a proxy with any of the Judges, It is, therefore, most uncharitable and unconscionable for Leo Ekpenyong and his pay masters to attempt to rubbish and bring to disrepute the sterling reputation and character of Governor Emmanuel.

“Barrister Leo Ekpenyong is known to be a serial blackmailer. He was known to be the mastermind of all the petitions against Chief Godswill Akpabio, the former Governor of Akwa Ibom State and now Minister of Niger Delta Affairs to the EFCC and ICPC until Akpabio succumbed to his blackmail and handsomely paid him to recapitulate.

“Let us state emphatically here that Leo Ekpenyong has taken his trade of blackmail across redlines.

“We demand that Leo Ekpenyong should produce the factual evidence to establish his allegations against His Excellency, Governor Udom Emmanuel within Seven (7) days of this publication and publish same in at least three (3) reputable National Newspapers.

“If he fails to do so, we shall be left with no option but to deploy the full weight of the law, both civil and criminal, against him.”