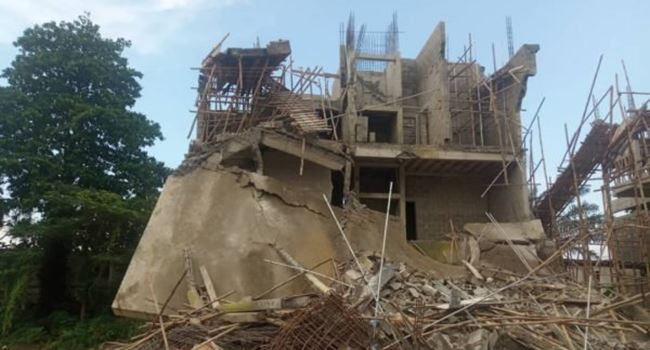 A tragic scene played out at Glover Court, Ikoyi, Lagos, when a 2-storey building under construction collapsed, killing one labourer and wounding four others at the site.

According to reports, the incident occurred when a part of the building suddenly gave way around 4pm on Friday trapping workers going about their duties.

Moments after the collapse, officials of the Lagos State Emergency Management Agency (LASEMA), reportedly arrived the scene of the incident following a distress call as they immediately moved to clear the rubble to save trapped victims.

After the arrival of LASEMA officials, ambulance and fire services also responded to the distress call as four workers were later rescued alive from the debris.

The incident was confirmed by he General Manager, Lagos State Emergency Management Agency, Dr Femi Oke-Osanyintolu, who said three of the injured persons had been treated and discharged.

The LASEMA boss who informed that the fourth injured victim at the building site was on admission at a hospital also stated that the recovered body had been deposited at the Lagos Island General Hospital mortuary,

He said, “The operation was prompt, effective and efficient. We were able to rescue four persons alive. However, we are still searching whether there is anybody under the rubble.

“We will do a comprehensive investigation before we could ascertain what caused the collapse. Our duty right now is to rescue the victims,” Oke-Osanyintolu added.

Eritrea alleges US coup plot, accuses Israel of demonising it before the eyes of the world