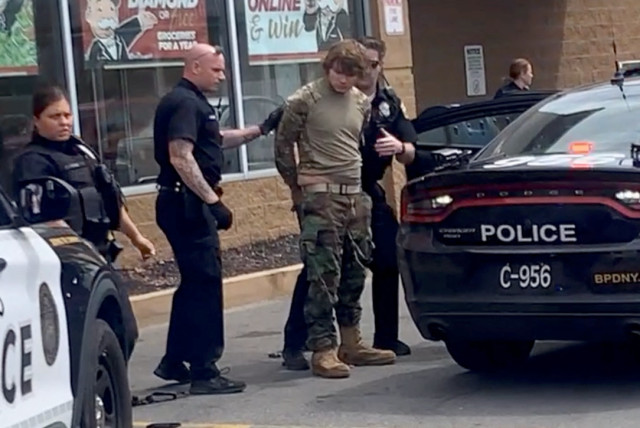 Ten black people were on Sunday, killed, with another three wounded in what the police has described as a “racially motivated hate crime” of mass shooting at a supermarket in Buffalo, New York, USA.

According to Erie County District Attorney, John Flynn who spoke at a press conference shortly after the incident, the shooting was carried out by a “heavily armed white teenager who fired a barrage of 50 shots outside and inside the Tops Supermarket.

“The suspect identified as Payton Gendron of Conklin, New York, 18, was arrested and has been arraigned on one count of first-degree murder and ordered held without bail,” Flynn said.

A police officer said the shooter had livestreamed the attack on social media and etched the names of previous mass shooters and racial epithets on the gun he allegedly used to carry out the attack.

“The gunman, wearing military fatigues, body armor and a tactical helmet, shot four people in the parking lot of a Tops Supermarket around 2:30 p.m., three fatally. He proceeded inside the store where he was confronted by a retired Buffalo police officer working security,” police said.

The Buffalo Police Commissioner Joseph Gramaglia who also held a press conference, police officers arrived at the store one minute after getting the first report of the shooting in progress and raced toward the gunfire to confront the suspect.

“Upon seeing the officers, the assailant placed the barrel of an assault-type rifle up to his chin and threatened to shoot himself. Officers were able to de-escalate the situation and talked the suspect into dropping the weapon.

“All 10 victims who died in the attack are Black – six females and four males – ranging from age 32 to 86. One of the wounded victims was Black while the two others were white.

“Among those killed was a Buffalo police officer working as security at the supermarket. He was identified as Aaron Salter Jr. He’s a true hero. He went down fighting. He went towards the gunfire,” Gramaglia said.

Related Topics:policeUS supermarket shooting
Up Next