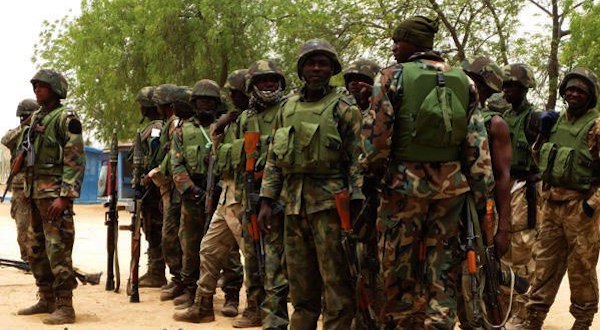 The Special Task Force in charge of security in Plateau State and Southern Kaduna has arrested 10 suspects in connection with recent conflicts in Jos.

Five persons had last Sunday been killed and 12 houses completely burnt in clashes between residents of Dutse Uku and Angwan Damisa, Jos North local government area of the state.

STF Commander, Maj.-Gen. Augustine Agundu, paraded some of the suspects who had been arrested before newsmen on Saturday in Jos.

“The suspects were arrested while they were in possession of premium motor spirit in two Swan water bottles, machetes, pickaxes and cutlasses.

READ ALSO: It’s not ‘proper’ for Katsina people to give Buhari the highest votes and still be killed by bandits- Aisha

“They were arrested in their illicit effort to commence reprisal attacks, a situation which would have engulfed the entire Jos metropolis.

“Also during a cordon-and-search operation in suspected hoodlums’ hideout in Dutse Uku, Abubakar Abdullahi, Mansur Abdullah and Agwom Azi were apprehended,” he explained.

According to him, the hoodlums on sighting approaching troops started hurling dangerous weapons at them.

In related developments, the STF commander revealed that troops deployed to Jema’a Local Government of Kaduna State acting on a tip-off apprehended three suspected gunrunners and a suspected armed robber.

Agundu named the suspected gunrunners as Philip Yusuf, Jessy Yusuf, and Caleb Yusuf while the armed robber is Istifanus Machu.

“Preliminary investigation revealed that the suspected gunrunners were siblings who have been into the fabrication of firearms for unscrupulous elements and criminals in the society since 2006.

“Items recovered from them included two unfinished fabricated revolver guns, two welding machines, one painting machine, a generator and a box containing assorted tools used for the fabrication of firearms.

“Machu, on the other hand, was caught with one camouflage shirt, one police force combat trouser, two web belts and a toy revolver pistol.

“Preliminary investigation revealed that Machu belongs to an armed robbery syndicate that has been operating and terrorising some villages in Southern Kaduna,” he added.

ABUJA: The story of women who have resorted to street begging to survive