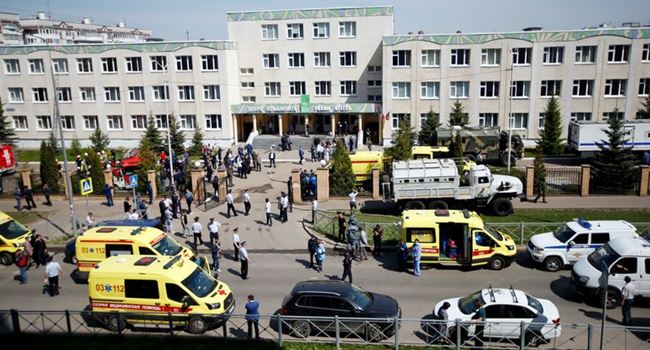 At least 10 students and a teacher have been reportedly shot dead in a school shooting in the Russian city of Kazan on Tuesday.

16 other people, including pupils and school administrators, were also injured in the shooting which Russian officials tag as terrorism.

Russia’s state RIA Novosti news agency reports that two gunmen had opened fire in the school, and one of them, a 19-year-old, has already been apprehended.

Local emergency officials said some children were evacuated from the school but others still remained in the building as authorities said additional security measures have been put into place in all schools in Kazan, the capital of Russia’s prediminantly Muslim Tatarstan region, roughly 700 kilometers (430 miles) east of Moscow.

While some Russian news agencies reported that two teenage gunmen were involved in the shooting, the RIA said one only gunman had been detained and that an explosion had been heard at the school.

Footage posted on social media showed a young man being pinned to the ground outside the school building by a police officer while another footage showed emergency service vehicles parked outside the school, with people running towards the building.

School shootings are rare in Russia. One of the last major shootings of its kind took place in Russian-annexed Crimea in 2018 when a student at a college killed 19 before turning his gun on himself.

Related Topics:RussiaRussian school shooting
Up Next