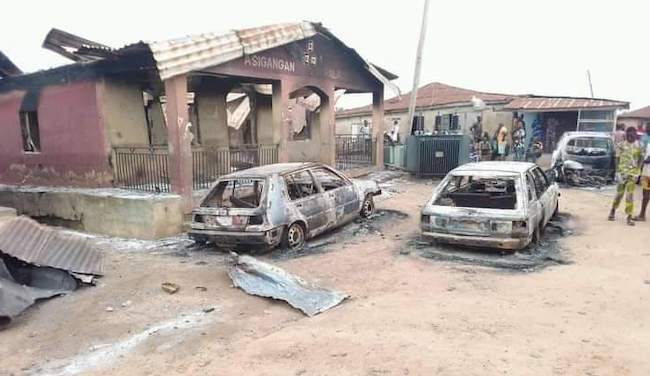 =The Oyo State Police Command has confirmed that 11 people were killed in Saturday’s night attack in Igangan town, Ibarapa North local government area of the state.

Suspected gunmen had invaded the town on motorcycles at about 11:00 p.m. on Saturday and allegedly opened fire on innocent citizens and burnt some property in the area.

The command’s spokesman, Adewale Osifeso, who disclosed this in a statement on Sunday in Ibadan, said 11 people, including some of the assailants were confirmed dead in the incident.

He added that a number of vehicles and buildings, including the Palace of the Asigangan of Igangan Town and a filling station were razed by the attackers.

According to him, the state’s Commissioner of Police, Ngozi Onadeko, had on Sunday paid an on-the-spot assessment visit to the town to critically assess the level and cause of the damage.

Osifeso said: “Intelligence and Tactical apparatuses, consisting of Police Mobile Force personnel, patrol units, and other tactical teams in concert with local hunters and vigilance group from the community were deployed to forestall further breakdown of law and order in the area.”

Related Topics:OyoOyo community attack
Up Next