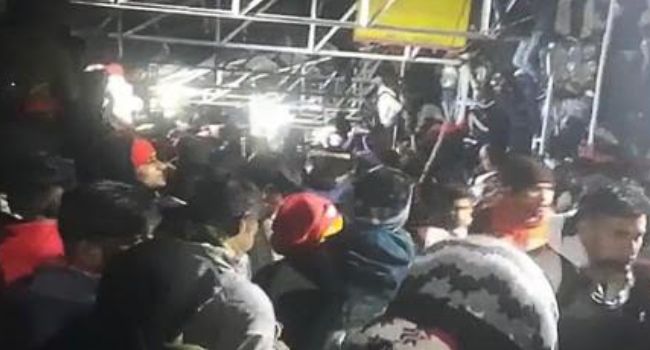 Twelve worshippers were confirmed dead during a stampede at one of India’s holiest shrines on New Year’s Day, a local official said.

The report added that many other devotees who thronged the Mata Vaishno Devi Shrine in Jammu, northern India when the stampede happened around 2:30 a.m. local time on Saturday, also sustained several degrees of injuries.

“So far, another 16 people were injured and have been hospitalized,” the Deputy Commissioner of Reasi, Charandeep Singh, said, while confirming the incident.

The cause of the stampede, according to Singh, has not yet been established but he stated that a high level inquiry has been ordered by Lieutenant Governor of Jammu and Kashmir Manoj Sinha.

Initial reports said the stampede was triggered by a heavy rush of people coming to pay their respect at the shrine to mark the beginning of the New Year.

“Something happened near one of the gates and I found myself under a crush of people. I suffocated and fell but somehow managed to stand up,” one of the victims said.

“I saw people moving over the bodies. It was a horrifying sight, but I managed to help in rescuing some injured people,” he added.

“People fell over each other… It was difficult to figure out whose leg or arms were tangled with whose,” another survivor identified as Ravinder said.

“I helped pick up eight bodies by the time ambulances arrived after about half an hour. I feel lucky to be alive but am still shaking with memory of what I saw.”

The Mata Vaishno Devi is one of the most revered Hindu shrines in northern India, with tens of thousands visiting to offer prayers every day.

Indian Prime Minister Narendra Modi, who expressed his sadness over the incident in a statement, said:

“I am extremely saddened by the loss of lives due to a stampede at Mata Vaishno Devi Bhawan. Condolences to the bereaved families. May the injured recover soon.”

Hurting a woman is an insult to God —Pope Francis