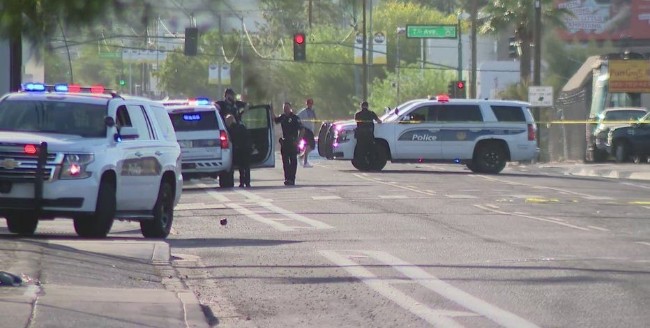 The police in Phoenix has confirmed the killing of a 14-year-old girl and eight others wounded in an overnight mass shooting at a crowded strip mall northwest of Arizona.

The police report also said two of the injured victims are in critical condition in a hospital.

A police spokesman, Sgt. Andy Williams who answered enquiries from reporters, said nine people were taken to hospitals after the shooting which occurred at around 1 am which sent people running near 10th Avenue and Hatcher Road.

“The 14-year-old girl died after being taken to the hospital, two women have life-threatening injuries, and six have injuries that are not life-threatening,” Sgt. Williams said.

“The injuries sustained by six other people in the shooting, including a teenage boy, are not life-threatening. They were all transported to local hospitals.

Sgt. Williams narrated that a fight had broken out during a “large gathering of roughly 100 people at the mall and escalated into shooting,” adding that so far, no arrest has been made but said the department is conducting an investigation into the shooting based on surveillance videos and other information.

Phoenix Mayor Kate Gallego who said she was devastated at the shooting wrote on Twitter that something must be done to stop the shootings.

“Time has run out. Change must happen now. It seems we can’t go a day without another mass shooting,” she wrote.

The Arizona shooting comes on the heels of recent incidents of mass shooting across many Anerican cities including a massacre at an elementary school in Uvalde, Texas, last week where 19 children and two teachers were killed, followed by another shooting at a supermarket in Buffalo, New York, which has led widespread calls for more gun control.

Related Topics:US SHOOTING
Up Next

Woman tracks boyfriend with AirTags, kills him after spotting him with another woman