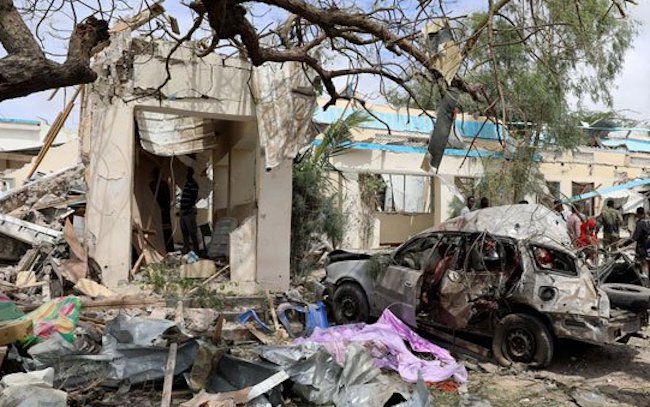 At least 15 army recruits were on Tuesday killed in a suicide bomb attack at a military training camp in Mogadishu, Somalia’s capital.

An Army intelligence officer, Mohamed Adan, told journalists the attacker disguised among recruits outside the General Dhegobadan Military Camp, when the blast occurred.

He said: “I have counted about 15 new recruits who have been killed in the blast.

He, however, said the death toll could be higher.

“The injured people were taken to Mogadishu’s Madina Hospital,” he added.

Nobody has claimed responsibility for the attack described as the deadliest in the capital for 18 months.

81 people were killed by a suicide car bomber at a checkpoint in the city centre in December 2019 while the last significant assault on a hotel killed 11 in August 2020.

Somalia has been mired in interlocking crises for the last 30 years, with repeated bouts of civil war, clan conflict, armed rebellion, famine, and political instability.

Related Topics:Somali’s suicide blast
Up Next

US records 600,000 COVID-19 deaths as number of cases from Indian variant rises