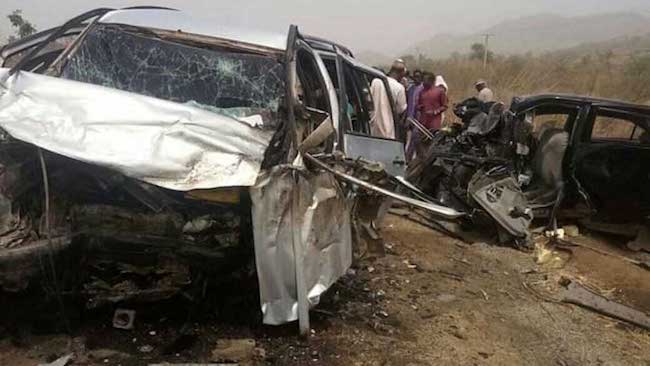 At least 15 persons have been confirmed dead and five others seriously injured in an auto crash in Kogi State on Tuesday.

The Sector Commander of the Federal Road Safety Corps (FRSC) in the state, Stephen Dawulung, who confirmed the accident to journalists in Lokoja, said a J-5 Boxer Bus and a petrol tanker were involved in the crash at Koton-Karfe along Lokoja-Abuja highway at 7:30 a.m. on Tuesday.

He added that the five injured persons were rushed to Ideal Hospital at Koton-Karfe for immediate medical attention while remains of the dead victims had been deposited at the Morgue of the Federal Medical Centre (FMC) in Lokoja.

The FRSC official blamed the accident on violation of traffic rules.

Dawulung said: “The bus driver left his lane and was driving in the opposite direction at high speed only to have a head on collision with an oncoming petrol tanker.

“Thank God the tanker which was laden with petroleum products did not go up in flames, which could have been more devastating and worrisome.

“The bus was carrying iron cramps with 17 passengers, 15 of which were terribly squeezed and choked to death during the collision.”