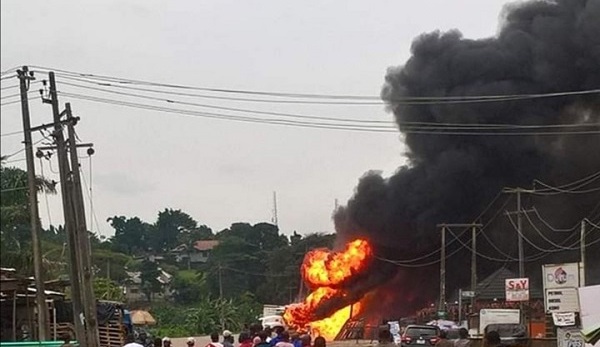 At least 15 persons were injured in a gas tanker explosion on Thursday in Ifako-Ijaiye local government area of Lagos State on Thursday.

He said several properties including vehicles were razed by the ensuing inferno.

The incident occurred just 24 hours after more than 20 persons were killed in fuel tanker explosion in Kogi State.

Farinloye said the Lagos incident occurred at 3:05 p.m., when the gas tanker which was trying to enter a gas plant in the area suddenly went up in flames.

“Also damaged were a block industry and an attached office, a cement store and a sawmill and several stores where building materials are being sold.

“The people injured were immediately taken to the Water Works Clinic. 15 people were admitted there.

“Two persons that were critically injured have been referred to the General Hospital. Three others are presently on admission and are being observed.

“The remaining 10 had minor injuries and have been discharged.”

“The response was swift and the fire has been extinguished. Some of the injured persons told us that they immediately jumped into a nearby canal which was filled with water as it rained today,” he added.