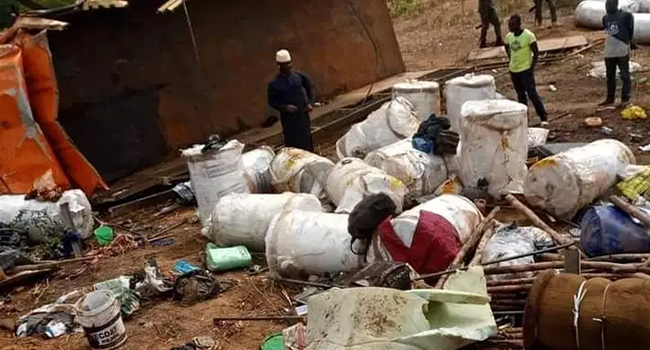 At least 19 passengers died in an auto accident along the Kaduna-Abuja Highway on Sunday.

The state’s Commissioner for Internal Security and Home Affairs, Samuel Aruwan, who confirmed the accident to journalists on Monday, said the accident involved a DAF trailer involved heading for Kano from Lagos.

According to him, the accident was caused by a combination of over-speeding and tyre burst which caused the truck to lose control and veer into the bush.

Aruwan said 53 people were involved in the crash, adding that 16 died on the spot while three others were confirmed dead later.

34 other passengers sustained injuries which ranged from bruises and cuts to dislocations and head injuries.

He said: “Security agencies have reported that 19 people died in a ghastly road traffic crash at the Kateri axis of the Kaduna-Abuja highway on Sunday.

“According to the report, the crash, which occurred late on Sunday evening, involved a commercial DAF trailer and was caused by a combination of speeding, and an exploding tyre, leading to a loss of control, which caused the vehicle to veer into the bush.

“A total of 53 people were involved in the crash; 16 of these died on the spot, with three others later confirmed dead.

“34 other passengers sustained injuries which ranged from bruises and cuts to dislocations and head injuries. They were evacuated from the scene by personnel of the Federal Road Safety Corps.”

Anambra govt bans use of tinted glass on vehicles, touting