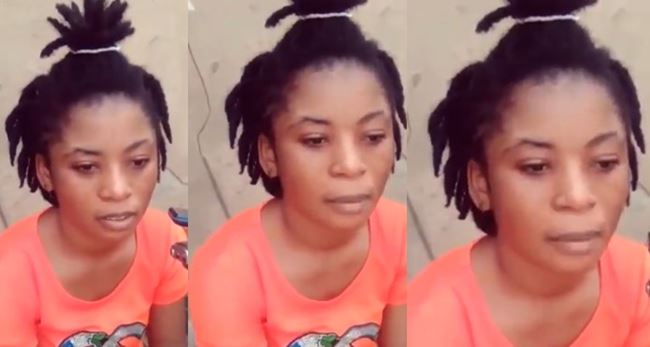 A 20-year-old lady, Fatima Usman, has called out her father, Usman Momoh, a staff of Rufus Giwa Polytechnic, Owo, Ondo State, accusing him of sleeping with her for a long time and often threatening to kill her anytime she refused his sexual advances.

Fatima, who made the disclosure in a viral video on Thursday, said her father started having the incestuous affair with her in 2018 and whenever she refused to have sex with him, he would send her out of the house at the midnight.

In the two minutes, ten seconds video, the lady said:

“My father has been sleeping with me for a very long time, and whenever I tried to say no, he would send me out of the room. If I say I will voice out, he would be threatening to kill me. He would bring out a knife and show me that if I tell anybody, he would kill me.”

She added that though her parents live in the same house, her mother never bothered to check on her whenever her father sent her out of the house and did not care about the sinful act.

“My mother did not bother to check on me whether I slept in the room or not. Anytime my father sent me out and I slept outside, my mother would have slept off; she did not know what was happening.”

Calling on the government of the state and human rights groups to come to her aid and help her get justice, Fatima said she had reported the matter to her father’s family.

In another video on the same issue, a man who claimed to be an in-law to Fatima’s father confirmed the incident and said the family had intervened in the matter.

“When we heard about the matter, he (Momoh) was asked to bring some items as atonement for the incestuous act and he provided those items, which included tubers of yam, goat, local gin, among others. After that, the elders in the village warned the girl not to return to her father’s house, but be staying with me.”

The man also stated that the matter was reported at a police station and Momoh was arrested, detained and later granted bail.