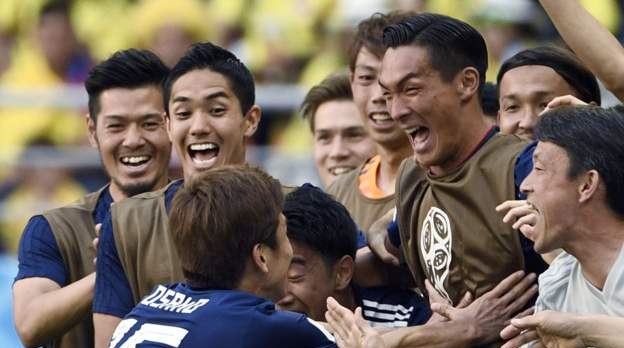 Japan got off to a good start at the 2018 FIFA World Cup by holding on to a 2-1 lead against Columbia in a Group H opener at the Saransk Stadium in Russia on Tuesday.

Colombia were reduced to 10 men after Carlos Sanchez was dismissed for handball in the opening minutes of the encounter.

A penalty was awarded following the offence, and Japan’s Shinji Kagawa converted the spot kick by sending David Ospina the wrong way in the sixth minute to take the lead at the Saransk Stadium.

Colombia later equalized before half time, as Juan Quintero hits a free-kick under the wall as it jumps, and goalkeeper Eiji Kawashima did not see the shot until late.

The keeper, after fumbling over the line by his post, tried to claim the ball didn’t go in, but the goalline technology proved him wrong.

But Japan went on to win the game after Keisuke Honda delivered a corner in the 73rd minute, as Yuya Osako directed a header in off the post to seal the victory.

It was Osako’s eighth international goal, and it gave Japan their best possible start to the 2018 World Cup.

The other Group H match between Poland and Senegal holds later on Tuesday.

Columbia will face Poland in their next game while Japan will take on Senegal.