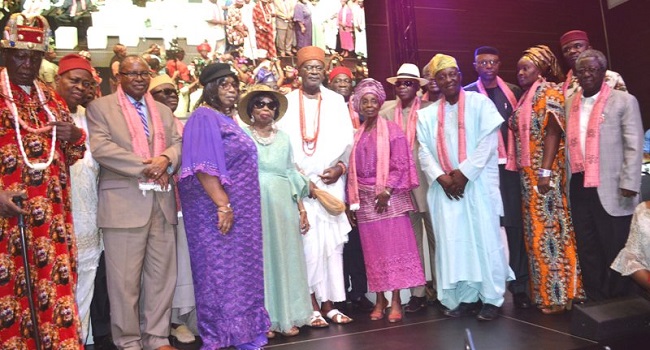 Acting on the strength of an invitation forwarded to me by the Nzuko Umunna/Aka-Ikenga and Core Federalists Group, the organizers of a Handshake Across Nigeria Summit, I took a trip on Monday 20th, November 2019 to the MUSON Centre, Onikan, Lagos venue of the programme.

The hall was filled to capacity and dotted with regalia of the major ethnic groups in Nigeria. I met with courageous Nigerians and came across Nigerians who has met resistance from their own government in the past but refused to give up in their quest to build a better Nigeria. Most importantly, I listened to different speeches from these prominent Nigerians.

But of all that I heard/observed, the gathering aside acknowledging what has been on the mind of Nigerians, essentially demonstrated a strong conviction that none discrimination, justice, and fairness are the foundation for peace, unity, stability and economic prosperity of any nation. And further asserted that building a nation where all citizens of the country shall not be discriminated against on the basis of ethnicity, sex, language, religion, political or other opinions, birth or other status is possible.

Certainly, in my understanding, there are grains of truth in the above position as it has not only brought out something different/ fundamentally new that will help shape our democracy but rededicate the nation to promoting /intensification of resource generation towards none-oil sector where all federating units of the nation shall be free to generate and utilize such resources.

Such a move as agreed by the gathering shall without any shadow of the doubt guarantee the independence of the federating units, to establish laws, policies and process to tax goods, services, and assets as well as the rights to utilize revenues realized from these towards meeting the needs of the federating units; call it restructuring or ‘reconfiguration of the nation, you may not be wrong.

Indisputably, devolution of power at the center has become inevitable as our system is presently postured in an inverted pyramid position making collapse inevitable if something dramatic is not done to remedy the situation. Again, doing so will not only provide the opportunity to have most of the items contained in the exclusive list moved to the states and local government authorities but change that framework that presents Abuja as a general surrounded by many lieutenants.

However, proffering solutions without first acknowledging the factors that made this appalling situation to flourish will sum up to a pragmatic demonstration of naivety on my part.

This is made worse by these leaders inability to abide by the time-honoured warning that stated thus;; ‘‘never be so foolish to believe that you are stirring admiration by flaunting the qualities that raised you above others. By making aware of their inferior positions, you are only stirring unhappy admiration or envy that will gnaw at them until they undermine you in ways that you may not foresee’. It is only the fools that dare the god of envy by flaunting his victory’.

As an illustration of the above , it is factually backed that the Northern Region under the Premiership of the late Ahmadu Bello never hid his feeling of superiority over other regions as he before the independence threatened to pull out of Nigeria if it was not allocated more parliamentary seats than the south. And the departing British colonial masters, desirous of one big entity, quickly succumbed to the threat.

To further support this claim that North at that time did not pretend its superiority or never wanted to have anything to do with Nigeria is the motto of the ruling party in that region at that time which was; ‘One North, One People, One Destiny’. And the name of the party itself ‘Northern People’s Congress, NPC, was suggestive of separatist fervor, distinct identity.

In a related development, without minding that its operational principle negates meritocracy and promotes mediocrity, it was such feeling of superiority by one group against the other coupled with the manipulative antics of the deconstructionists that undermined the provisions of the federal character that was created to ensure equitable distribution of political positions and socioeconomic booties among federating unites.

Sadly, increasingly by choice or by accident, the heat generated by the restructuring debacle has further reinforced the general belief that however good a system of government could be; bad leadership can bring harm to its people.

And Nigerian experience has further explained why many of the over 80 constitutions drafted by Britain and France for their former colonies came to grief- not because of the flaws in the constitution but simply because the precondition for a democratic system of government which is the willingness to provide people-purposed was conspicuously lacking.

However, now that the call for an end to this anemic federal system of ours has grown from mere rhetoric to become an issue of national/ international concern, so has our responsibility undoubtedly transcended.

For Nigerians to, therefore, have a ‘’handshake not just across Nigeria but with history, what we can, and should do is to remember that ‘very generation must, out of relative obscurity, discover its mission, fulfill it or betray it’.

Part of that effort to fulfilling our mission among others in my views shall include using the 2019 general election to effect a general change in leadership from its heads and bring in leaders that will not just lead us well but assist in getting this country restructured to reflect a true federal structure. Achieving this feat will be highly rewarding as everything raise and falls on leadership.

While the nation is waiting for this opportunity, the Federal Government must in the interim develop and implement laws and policies relating to law enforcement including the enforcement aimed at promoting compliance of all the laws and policies established by the federating units in relations to resource generation and protection of lives and properties of persons within their respective jurisdictions.

As also mooted by Nigerians with discerning minds, it will be in the interest of the nation if the government reforms the civil service towards promoting its efficiency, result oriented driven performance and improved staff conditions of service.

On our parts as citizens, Let us restructure our mindsets as a people and do away with that mentality that keeps us divided. Doing this will enable us recognize that all human beings are born free and equal in dignity and rights, that they are endowed with reason and conscience and should act towards one another in the spirit of brotherhood as proclaimed in the universal declaration of human rights.

Bearing this in mind, our primary concern should be to work out modalities of instituting a reorientation plan that will erase the unpatriotic tendencies in us as well as usher in a robust nation as restructuring a political entity called Nigeria is important but restructuring our mentalities is not just essential but fundamental.