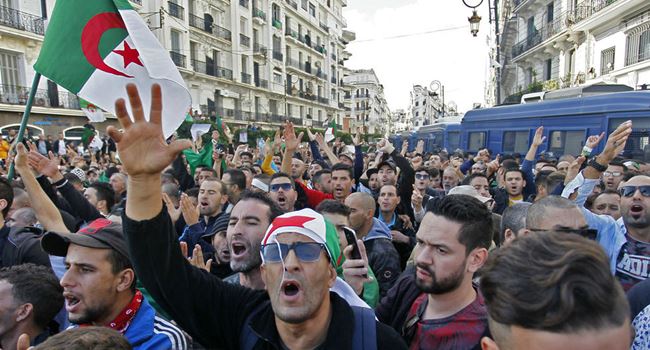 Thousands of people have taken to the streets of the Algerian capital, Algiers, to protest against Thursday’s presidential election in the North African nation.

They briefly overran a polling station. An attempt by police to disperse the crowd failed.

Two more voting centres were stormed in the Kabylie region, east of the capital on Friday, the BBC reports.

The vote follows the ousting of President Abdelaziz Bouteflika, who was forced to resign in April.

He had been in power for two decades, but was ousted following anti-government demonstrations across the country.

The protesters have continued to demand the sweeping away of Algeria’s entire political establishment, and they are boycotting the election.

All five candidates standing were closely linked with the rule of ex-President Bouteflika.

For close to a year, thousands of Algerians have protested every Friday in Algiers and other cities across the country against any elections under the current government.

They want all officials associated with the regime of ousted President Bouteflika to be removed from office, including interim President, Abdelkader Bensalah and Prime Minister Nouredine Bedoui.