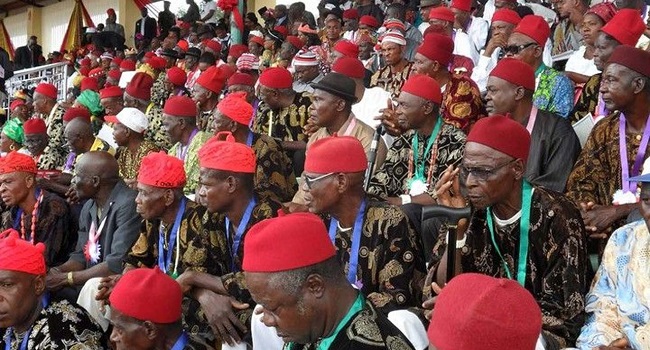 A group, Coalition of Ethnic Nationalities Agenda for Atiku (CENTAA) has warned the Igbo community in Lagos state not to fall for the sweet talks being reeled out by the All Progressive Congress (APC), especially in Lagos State.

It warned that “APC will sweet-talk you, then use and dump you, like they have done many people. Learn from them. Learn from your kinsman Ben Akabueze. Learn from Okada motorcycle operators. Learn from Afenifere. Learn from Iya Olojas. Learn from industrialists, commoners and the uncountable individuals and groups whose trust these APC people have betrayed,” AAMEN said.

The group spoke in response to a pledge by the APC governorship candidate in Lagos State, Babajide Sanwoolu that an Igbo person would one day be Governor in the state.

Warning that Lagos APC would only end up disappointing non-indigenes, CENTAA reminded them that Igbo slot of Commissioner was withdrawn by the APC government as alleged punishment for massively voting PDP in the last polls.

Ben Akabueze, a banker was appointed Commissioner for Economic Planning and Budget by the Lagos State Government in 2007 to 2015, after which he was dropped with no Igbo man making the cabinet thereafter.

CENTAA gave this counsel in a statement at the weekend by Adeoye Jolaosho, its Executive Secretary, in response to a statement that Sanwoolu made while being honoured with an Igbo chieftaincy title at the National Stadium, Lagos recently.

“Simply put, these people do not believe in anyone but themselves and anyone who will sell his soul to satisfy their selfishness and corruption,” CENTAA said. “These leopards cannot change their skin. Pharaoh will always be Pharaoh –manipulative, vindictive, selfish, inconsiderate, merciless and cunning.”

According to the group, Agbaje who since 2015 held the Igbo title of, “Ezi Nwanne Ndigbo 1,” would not disappoint South-Easterners.

“Not only will PDP appoint Igbo people and other non-indigenes as commissioners in their cabinet come 2019, but they will get board as well as special adviser positions,” CENTAA vouched for the PDP candidate, Mr. Jimi Agbaje. “And you can take that to the bank. Those who know him know that his word is his bond.”

In addition, the statement reminded the South-Easterners that a notable monarch who openly supported APC had threatened to drive Igbo people into the lagoon should they go against his will and vote against his party in the 2015 polls.

“APC leaders are notorious for using and dumping people,” the group said, warning them not to forget how their businesses were demolished in Mosafejo-Oshodi Market, with lingering threats to overrun Igbo-dominated enterprise centres for purely political reasons in such places as ASPAMDA at Trade Fair Complex and Computer Village.

“Now that they want your votes they are singing sweet nothings into your ears,” the statement noted. “But continue to play along, until Election Day when you will teach these serial betrayers the lesson of their life and use your votes to push them out of power democratically.”

CENTAA further reminded the South-Easterners that the current leadership of Lagos had demonstrated an incontrovertibly palpable disdain for Igbo businesses and people.

“Go to Potoki Prisons in Badagry and see how many Igbo street traders are languishing in detention there in subhuman conditions,” it said.

Promising that Agbaje, with his background in activism, would liberate such detainees within 48 hours of taking power, CENTAA said that such people would benefit from his statewide proclamation of freedom, in order to demonstrate unequivocally that he was not paying lip service to the concept.

The group also alleged, that APC was currently erecting stumbling blocks to prevent Igbo voters from collecting their PVCs in pro-PDP councils and states, because of the ruling party’s fear they would again vote massively for their traditional allies, PDP and its candidates.

‘This country can never change, I swear.’ More on what Amaechi allegedly said in leaked audio (Listen)