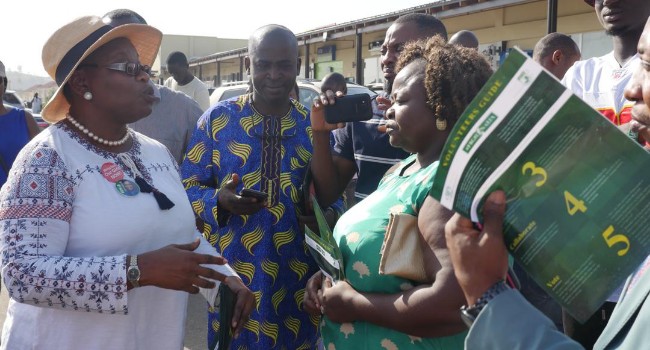 The presidential candidate of the Allied Congress Party of Nigeria (ACPN), Dr. Obiageli Ezekwesili, on Sunday took her campaign trail to the streets of Abuja.

During a one-on-one interaction with Abuja residents, she hinted them of her aspiration to become the next president of Nigeria in 2019.

She also informed them about the need to vote for her so as to save Nigeria from economic strangulation and other social ills.

The former Minister of Education, who distributed booklets containing her policy action to people she met on the streets, said she was the best candidate among those parading themselves for the job.

Expectedly, she challenged them to not only cast their votes for her in the forthcoming presidential election so as not only to change their fortunes in particular, but that of the country in general.

Speaking during the campaign that kicked off at Shoprite in Apo, Ezekwesili said Nigeria was facing slow pace of progress due to mismanagement of resources by the people that were entrusted with leadership.

Ezekwesili explained that she adopted the street campaign strategy because it was a disruptive strategy that would make money unnecessary in campaign and during.

Read also: 2019: We must hold Buhari to his promise of free, fair, credible elections- Sultan

She said that she adopted the strategy to prove to people, who had been asking her about her structure, that she had it in the streets.

The convener of Bring Back Our Girls (BBOG) said, “What we are doing is distribution because a lot of people do say, ‘where is your structure?’

“This is a disruptive strategy; it is a strategy that is going to make money unnecessary to the extent that it (money) will no longer matter in elections.”

She said, “My entry into politics is to change a lot of things. The idea that you go and embezzle so much money and then you use it to buy an office through politics in order to embezzle yet another round of money must end.

“So, we are a low budget campaign. You see what I’m doing? Some of the people who are used to the old traditional system will not understand it. But wait and see. Just wait and see what is going to happen.