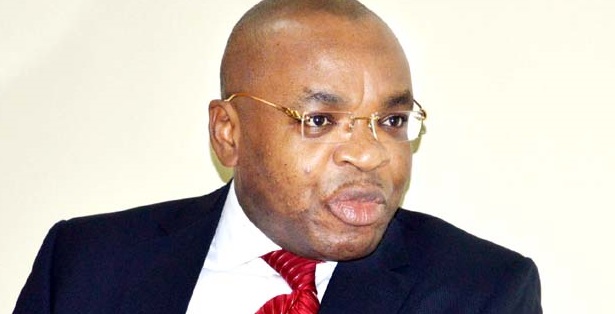 Akwa Ibom Governor Udom Emmanuel on Friday prayed against those he said were acting the role of God in the state.

Emmanuel, spoke in Uyo the state capital, while making his intention to seek re-election known to the people.

He also lambasted his predecessor, Senator Godswill Akpabio for the war remark he allegedly made that the All Progressives Congress (APC) would take over Akwa Ibom the way the German dictator, Adolf Hitler, invaded Poland in 1939, Emmanuel said:

“I heard human being boast that the Akwa Ibom politics in 2019 will be like the invasion of Poland by Hitler. Whoever is buying guns, trying to kill our children, meanwhile they have gone to hide their own children abroad, we say Holy Ghost….”

Speaking further he said, “Politeness is not weakness, so you need to go and warn them. No single person can determine who governs the state”.

Udom who pleaded with the people of the state to consider him for second term in office, listed some of his achievements in his first term in office to include the conglomeration of industrial clusters that houses toothpick, pencil, syringe, electric metres and coconut factories as well as Peacock Paint, fertilizer firms and many kilometres of roads.

“No man is God. I submit myself for consideration to continue with the good work that I have done and I seek your support for my candidature as governor for second term,” he told the people.

He pleaded with the people to support his aspiration for second term so as to allow him sustenain the tempo of good governance he had introduced in the state.

According to him, the immediate past governor of the state, Akpabio left behind some uncompleted projects, including the Sheraton by Four Points Hotel at Ikot Ekpene and the Uyo – Ikot Ekpene road project.

He said, “Who said they had completed the Sheraton by Four Points Hotel?

“It is only today that we are negotiating with Starwood Group for the retaining of the name, which some people surreptitiously put up on a building.

“It is now that we are doing external works in that premises in order to turn it into a hotel. Is building a hotel? Can a building be a hotel?

“I don’t want to join issues today, I just want to humbly submit myself. But the truth must be told that it is just now that I have paid $7.2 million to Starwood so that we can retain the name that was surreptitiously put on the building called Four-Point by Sheraton Hotel.

Police summons Fani-Kayode over ‘Conspiracy..conduct likely to cause breach of peace’