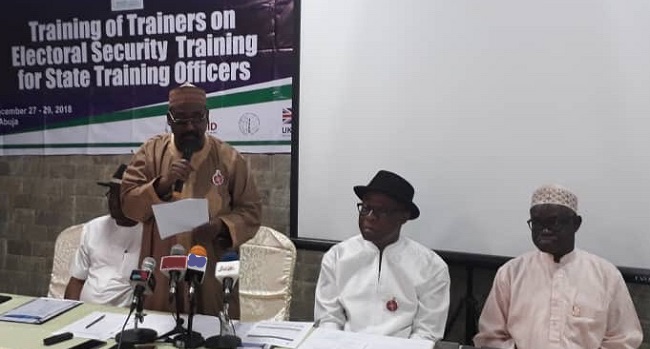 The umpire in the forthcoming general elections in the country, the Independent National Electoral Commission (INEC) has introduced a mobile app that will enable Nigerians observe and report elections live from their polling units

This was disclosed on Thursday by INEC’s National Commission and Chairman, Board of the Electoral Institute, Mustapha Leeky.

Leeky who was declaring open, a three-day workshop on electoral security training in Abuja, explained that the app enables voters to send pictures and videos of situation at their voting points combined with a geo-reference that gives the location of such situation.

He said, “We have deployed something that most of you media men are paying little regards to; and that is the fact, as at today, if you go to INEC website or Google Play Store, you can download an INEC i-reporter which is something that INEC has spent a lot of money in developing.

“It allows every Nigerian to be an observer and a reporter of events as it happens. This, you can download freely, and have it on your smart phones. So, you can take pictures, you can also take a short video and send it to us.

“It is geo-reference, so we know exactly where that issue is taking place and we can easily draw the attention of police or other security agencies to make sure that the matter is actually addressed.”

“In INEC as an institution, we don’t buy votes and we don’t sell votes, we just count the votes.

The INEC commissioner also said that the polling units and ballot boxes have been reconfigured to keep cast vote hidden.

He said, “So we expect people to cast their votes freely, we have deployed a number of measures to ensure that vote buying does not interfere with our election.

“We have also banned the use of smart phones in the polling booth so that you don’t take a picture and show to anyone.”