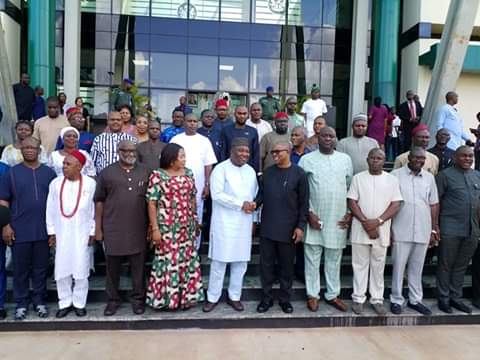 Obi, who was recently named the running mate to ex-vice president Atiku Abubakar, who is the PDP presidential candidate, spoke in Enugu when he was hosted by the state governor, Ifeanyi Ugwuanyi.

The former Anambra governor told Ugwuanyi that he was at the Government House to consult him and seek the usual support of the state.

He stressed that his candidacy was not about him “as Peter Obi” but the people of the Igbo nation and Nigerians at large.

“So for me this nomination is about our own area. We can’t continue to say we are not getting this or that or that we are marginalised,” he said.

His statement and that of Mr Ugwuanyi was released by the Enugu governor’s office.

Governor Ifeanyi Ugwuanyi of Enugu State on Friday played host to the Vice Presidential Candidate of the Peoples Democratic Party (PDP), Peter Obi, describing him as an iconic son of Igboland, who has distinguished himself creditably in private and public dealings as a successful businessman and two-term former Governor of Anambra State.

Governor Ugwuanyi, who described the PDP vice presidential candidate as a formidable and trusted party man, warmly welcomed him and his entourage to the Government House, Enugu.

The governor noted that Enugu is a PDP state and appreciated the people of the state for the massive support they gave the party in 2015, expressing confidence that with their endorsement, the 2019 election will also end in praise.

He therefore, used the opportunity to congratulate the entire PDP family on the party’s “very successful and peaceful convention in Port Harcourt”.

Read also: With the dollar cloud still hovering over him, Ganduje leads Islamic group to Buhari

Earlier in his speech, Mr. Obi told the governor that he was at the Government House to consult him and seek the usual support of the state, stressing that his candidacy was not about him “as Peter Obi” but the people of the Igbo nation and Nigerians at large.

The PDP vice presidential candidate, who was accorded a warm reception at the Akanu Ibiam International Airport, Enugu, by the state government delegation and other teeming supporters of the PDP led by the party’s chairman, Augustine Nnamani and Chief of Staff to the Governor, Festus Uzor, expressed delight that “this is the first time in my political life that I am welcomed at the airport”.

While applauding Gov. Ugwuanyi for his giant development strides in Enugu State, Mr Obi pointed out that the success of his nomination depends on the leaders of the South East geo-political zone, pledging to bring meaningful development to the zone such as the Enugu – Onitsha expressway, when elected into office.

His words: “So for me this nomination is about our own area. We can’t continue to say we are not getting this or that or that we are marginalised. These are some of the opportunities to re-address whatever we think is not in our positions.

“I have served as governor, so people know a bit of my record. I am here to say to you (Ugwuanyi), I remain one of you. Everybody knows that I believe in Enugu. I believe this is our capital and it remains so.

“Your Excellency, that is why I am here. I need your support and that of all of you. I assure that it is all about us and Nigerians, not about Peter Obi”.

The vice presidential candidate later visited the President-General of Ohanaeze Ndigbo, Nnia Nwodo, who welcomed him and noted how “extremely happy” he was to have him in audience at his residence in Enugu.

Mr Nwodo said that “as a party, the PDP has responded to our yearnings and aspirations by reacting to our feeling of marginalisation at the top echelon of our leadership of our great country by nominating you to vie for the position of the Vice President of Nigeria”.

The President General disclosed that the Apex Igbo body will “very soon convene a meeting of the highest organ of Ohanaeze Ndigbo Ime Obi when all the political parties are to bring out their candidates and we will take a decision on what direction Igbos will take in the next election”.

He extolled the leadership qualities of Mr Obi saying that “your nomination is enchanting, your public conduct while you were a governor exemplifies you as a man of outstanding humility”, adding: “Your incorruptibility in government speaks volume. I look forward to when Ohanaeze will take a decision on which party the Igbos will vote for and I wish it will be you”.

Disqualified APC aspirants say we shall not ‘be used and dumped’

With the dollar cloud still hovering over him, Ganduje leads Islamic group to Buhari