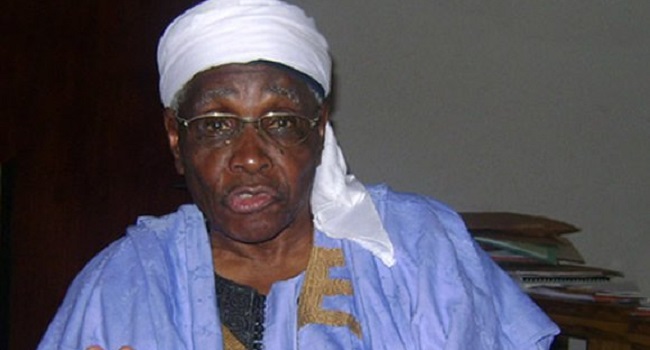 As campaigns for February 16, 2019 presidential election heightens, the issue of whether to support, or not to support President Muhammadu Buhari’s re-election bid is apparently tearing northern leaders apart.

No sooner had the convener of the Northern Elders’ Forum (NEF), Professor Ango Abdullahi, said that the region was not going to support Buhari’s reelection, than some other leaders in the region countered him, vowing their unalloyed support for the incumbent President.

Abdullahi, a former Ahmadu Bello University Vice Chancellor, had while speaking in Kaduna, claimed that the northern elders allegedly resolved not to support Buhari again following his failure to fulfill the basic things they demanded from him before dumping then President Goodluck Jonathan in 2015.

The elder statesman who did not reveal who the North will support this time, however mentioned two requests the region made from Buhari upon his assumption of office to include, “concrete steps to address the abject poverty and underdevelopment in the North.”

He said the President “has woefully failed to marginally address” any of those two request.

The NEF leader went further to allege that the President brought strange elements into government, thereby adding no value to governance and “we are vindicated on this score because his wife, Aisha, has confirmed that this week”.

He added, “Assuming that things are working in the North or in Nigeria as a whole, we would have taken a different position but everyone can see that things are not working under this government. Perhaps, as a prelude to where this government has taken this country, Buhari wasted six months before being able to set up his cabinet.

“And when he eventually formed the cabinet, he brought in persons who had not added any value to governance and his wife has vindicated us on this.

“As things stand today, we in the NEF do not believe that Nigeria’s cause will be helped by Buhari’s re-election in 2019. That is why we have decided to pick one of the other presidential candidates from the North for next year’s contest.

READ ALSO: Buhari not signing electoral bill ‘no big deal’, nobody can force him to- Sen Lawan

“It would be futile for anyone to blame anybody for the decision of the NEF against Buhari because his own wife has openly alluded to our position that some persons, who do not have the interest of Nigeria at heart, are running the Buhari administration without adding real value to the governance of Nigeria.

“This is the reason we meticulous screened over 13 persons from the North and finally picked four out of the large number and our choice has also been endorsed by leaders of Southern Nigeria including Ohanaeze Ndigbo, Afenifere and Middle Belt leaders.

“We believe that there is no need for us to be talking to Buhari again about what he needs since that will not change anything. We have moved and our votes will not be based on sentiment of tribe or religion but strictly on performance”.

According to Abdullahi, Buhari was the architect of his own misfortune because he constantly rebuffed efforts northern leaders made to meet with him and address the issues raised against him.

However, the position of Abdullahi was without delay countered by three key officials of NEF who are, Maj. Gen. Paul Tarfa, Capt. Basir Sodangi and Sani Daura.

You may also like: On Buhari’s orders, Obi’s bank accounts have been frozen– PDP

The trio in a statement argued that NEF never at any time resolved to dump Buhari, adding that “there was no justification for the North to reject Buhari in 2019, given the fact that he had taken the country to the next level, having taken over the reins of power at a time there was widespread insecurity, corruption and economic decay.

“No one can deny the reality that the country was reaching a breaking point. With a committed leadership and sincerity, President Buhari has achieved immeasurable success in all fronts during the last three years.

“We sincerely believe that the Buhari administration is doing well and should be re-elected to consolidate on the foundation of progress which has been laid by it. President Buhari is on record as the leader who has taken the fight to the criminals. For the fight to continue to victory, President Buhari should be encouraged by all well-meaning Nigerians to stamp out the monster of corruption.

“In view of the foregoing, the members of the NEF reiterate our solid support for the leadership of President Muhammadu Buhari in the interest of peaceful co-existence, honest leadership, progress and continuity, come 2019 and beyond”.