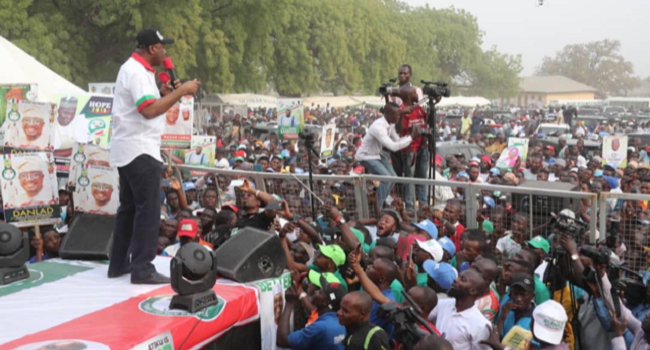 Senate President Bukola Saraki has vowed that alleged efforts of a national leader of the All Progressives Congress(APC), Senator Bola Tinubu, and others in his party to take over Kwara State in the coming 2019 election will be frustrated.

Saraki stated this at Bode-Saadu in Moro Local Government Area of the state during the flag-off of the PDP governorship campaign rally in the state.

He said, “Kwara is a state in the northern region of the country and not in the South-west where Tinubu has been allegedly tormenting the people of the zone.

“The members of the PDP in the state and the people of the state have resolved to frustrate the Tinubu’s threat to wrest power in Kwara State for APC by all means.

“Those who are against us are not from Kwara State but they are from outside North where we belong, and by the grace of God they will not have their way in the state in the 2019 elections.

“These opposition groups are not known in Kwara State. They are just impostors, deceptive people and propagandists. I want you to reject them during the polls I order to move the state forward.

“I want to tell you that the forthcoming general election in the state is not about me or about our governorship candidate, Hon. Razak Atunwa, and other candidates in the election, but it is about Kwara State and our tradition.

READ ALSO: Obiano thanks Buhari for completing Zik’s mausoleum 23 years after it was started

Adding that election in Kwara will between the tenants and landlord, Saraki said, “We must all resist the move by the tenants to cause any disharmony in the state.”

He lamented the rate of poverty, sufferings, kidnappings, general insecurity in the country and called on Nigerians to rally support for the PDP during the polls so as to bring new lease of life to the people of the country.

Saraki called on PDP members to take their campaigns to various households in the state and mobilised for the party to ensure victory the forthcoming general election.