Home » Politics » 2019: You are being deceived, PDP tells Buhari 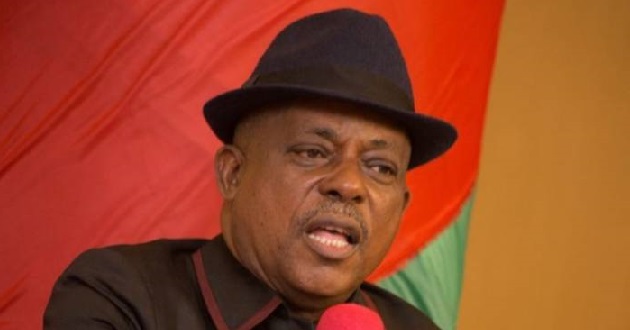 For boasting that he and his party, the All Progressives Congress, APC, will win the 2019 general elections, the Peoples Democratic Party, PDP, has told President Muhammadu Buhari that he is being deceived.

The party said in an interview by its National Chairman, Uche Secondus that the President is being deceived by people who are not familiar with the politics of their states but promising that they will deliver.

Warning that President Buhari and the APC will be shocked by the outcome of the elections, Secondus also warned the President, the Independent National Electoral Commission, INEC and security agencies against rigging the elections.

According to him, Nigerians are determined to effect a positive change in the polity in 2019, and would therefore not condone any form of rigging.

It would be recalled that President Buhari had on Friday boasted that his party would win the 2019 general elections, adding that those who think otherwise cannot just see the handwriting on the wall.

The President spoke against the backdrop of the outcome of the Ekiti State governorship election and the Federal legislative bye elections conducted recently by INEC.

Read Also: The signs are clear! Only those who can’t see believe I’ll lose 2019 election— Buhari

Reacting to the President’s assertion, Secondus said: “President Buhari is being deceived by those who are not familiar with politics of their states that they would deliver results to him.

“Will Nigerians vote for someone who will not stay in the country to administer the country, but would choose to be junketing all over the world?

“We know he relies on security agencies and INEC to rig for him, but we want to assure him that the people are determined to put an end to the misery he and his government have brought to the nation.”