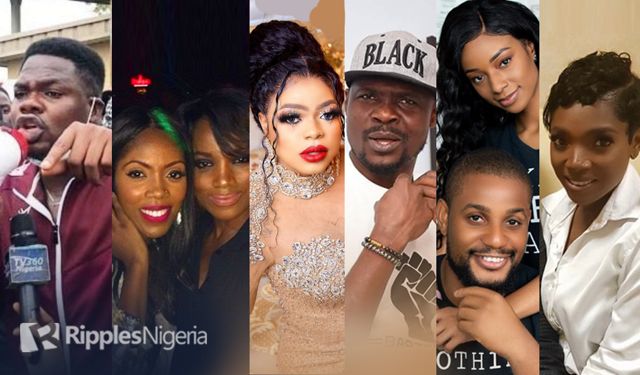 As the new year begins, Ripples Nigeria has gathered some of the most controversial moments involving celebrities in the last year 2021.

The year 2021 was quiet eventful in the entertainment industry, several notable moments occurred while there were some devastating incidents as well.

On our list today, we would be unravelling some moments where celebrities were entangled in controversies that would have a distinct mark on their respective careers and personalities henceforth.

Nigerian celebrities usually do not disappoint when it comes to instigating havoc, however, last year had some moments that made the audience stare in disbelief.

Sit back, relax as we discuss ten of the most controversial celebrity moments in 2021.

The controversial demise of the content creator came within a short period of her involvement in a feud with controversial clergyman and founder of Mountain of Holy Ghost Intervention and Deliverance Ministry, Prophet Odumeje, and later Nollywood actress, Rita Edochie and an Asaba based native doctor, Chi Marine Temple.

Till date, Nigerians are still concerned with the controversies hovering around the demise of Ada Jesus.

Prior to her unfortunate demise on Wednesday, April 21, 2021, Ada Jesus was a follower of the Anambra-based preacher, Prophet Odumeje.

However, she published a video on her YouTube and Instagram page in late 2020 where she made several allegations against the controversial clergyman. The following Sunday, Odumeje addressed Ada Jesus’ revelation during his sermon.

Things began to go down spiral for Ada Jesus from there. She was diagnosed with kidney disease which left her paralyzed and using a wheelchair, causing her body to swell, especially her face and stomach.

In the final month of her life, when her health deteriorated further, she went to ask for forgiveness from pastor Odumeje, actress Rita Edochie and the aforementioned native doctor.

Chi Marine Temple forgave her when she visited him, but Odumeje and Rita Edochie refused to forgive her and instead cursed her and said her generations will suffer for the insults and alleged lies against him.

The content creator and social media comedian died of cardiac arrest on the 21st of April, days two days after she turned 23.

Days after her demise, Rita Edochie published a thanksgiving video on her Instagram page while Odumeje stated during a sermon that nobody speaks against him and goes scot-free.

Prior to the #EndSARS protest in the latter part of 2020, Adebola Adebayo, better known as Mr. Macaroni was simply a Nollywood actor and a social media content creator.

He simply wanted to entertain his followers on social media. However, more responsibility was to be bestowed upon him as the #EndSARS protest peaked. Macaroni embodied American civil rights activists, Malcom X and Martin Luther King Jnr. during the protest in 2020 as Nigerian youths took to the streets of the nation to protest against extrajudicial killings, police extortion, unemployment and other vices affecting the growth of the leaders of tomorrow.

Macaroni was not an ‘activist for hire’, he didn’t simply use the hashtag #EndSARS on his social media platforms to follow trends, instead he was prepared to use his medium to seek justice for those who had been belittled and ridiculed by the Nigerian system.

In February 2021 during the #OccupyLagos protest at the Lekki Tollgate barely four months after the shootout, Mr. Macaroni and a handful of Nigerian youths waged war against the government for reopening the tollgate.

It was in this moment that Nigerians witnessed how armed officers manhandled the social media content creator alongside other #OccupyLagos protesters. Courtesy of his fame, Macaroni received bail; but it was his comportment afterwards that endeared him to the hearts of Nigerians.

Macaroni alongside rapper Falz, spearheaded the #EndSARS memorial service in October, continuing his role as an activist and also speaking against injustice in Nigeria.

Macaroni also refused to accept Vice President Yemi Osinbajo’s invite to Aso Rock Villa, unlike his colleagues who became public enemies for failing to speak up for other youths at the conference.

A couple of weeks ago, Mr. Macaroni spoke against the Lagos State governor, Babajide Sanwo-Olu after he was invited for a ‘peace walk’ alongside rapper Falz and other notable socialites.

Macaroni has maintained that he is prepared to wage war against the government and its officials, regardless of what it takes him.

Popular Nollywood actor James Olarenwaju Omiyinka, aka Baba Ijesha made headlines in April 2021 after he was accused of molesting a 14-year-old girl.

According to reports, the actor had been assaulting the young lady since the age of seven. The heinous episode became more intense after it was discovered that the victim was the foster child of Baba Ijesha’s colleague, Princess.

She gave a detailed breakdown of how the disgraced actor who was her close friend visited her home and molested her child. About a week later, a video of the actor confessing to the crime surfaced online.

There was a massive uproar across the country with many people calling for the head of the actor. It was a different ball game entirely in the entertainment industry as celebrities picked sides.

The actor was later arraigned on a four-count charge of sexual assault and indecent treatment of a child.

4. The day Tiwa Savage fought Seyi Shay at the saloon

Nigerian singer, Tiwa Savage and her colleague, Seyi Shay made sure they settled their differences at a saloon in June 2021.

Though the females did not throw punches, they got into a heated argument that was too intense for social media users to ignore.

Savage and Shay put aside their celebrity status and millions of followers on social media as they insulted each other in public.

Their rift is said to have dated back to 2019 when another music star, Kizz Daniel, started a viral challenge tagged #FvckYouChallenge. Shay was alleged to have shaded Savage in her version of the challenge.

Here is the highlight.

It was leaked on social media before it quickly became the number one trending topic on the microblogging site, Twitter for obvious reasons, because the very short recording showed her having s3x with an unknown male.

6. Tonto Dikeh and her ephemeral relationship with Prince Kpokpogri

Tonto Dikeh’s relationship with Delta State politician Prince Kpokpogri was short-lived and one that she has since revealed she regretted ever being involved in.

Tonto Dikeh who was married to businessman Olakunle Churchill announced her new lover on Instagram in July 2021.

The Nollywood actress and the Delta State activist showered expensive gifts on each other to the admiration of fans. About two months into the relationship, they unfollowed each other on Instagram.

While fans were still trying to grapple with what was going on, a leaked audiotape of Kpokpogri accusing Tonto of being an alcoholic and an unrepentant smoker debuted on social media.

It was followed by weeks of accusations and counter-accusations by both parties.

Kpokpogri was reportedly arrested at some point at the request of the actress, however, he has since denied the report.

Had Nollywood actor Alexx Ekubo and Nigerian-born American model Fancy Acholonu not call off their relationship they could have tied the knot in November 2021.

In August, Acholonu took out all photos of her now estranged partner Ekubo from her Instagram page. She also unfollowed him on the social media platform. It became clear that there was fire on the mountain.

Less than 24 hours after many online tabloids revealed that the couple had split, Acholonu released a press statement calling off the engagement.

“I am aware this may be a shock to many people. I made the best decision for myself, because it is important that everyone finds happiness and live in their truth. At this time, my family and I ask for you all to please respect our privacy. Thank you so much.”

Ekubo remained silent about the breakup.

Annie Idibia in September 2021 went berzerk on social media as she alleged that her husband, 2Face Idibia was still having an affair with one of his baby mamas, Pero Adeniyi.

The Nollywood actress also accused members of 2Face’s family of not loving and caring about her since their marriage started.

A few weeks later, a leaked audiotape of the movie star surfaced where she threatened fire and brimstone.

2Face later released a statement asking the public to back off his marital issues.

In the month of May, popular transvestite and self-acclaimed male barbie, Bobrisky disclosed he was leaving the country for the Dominican Republic to undergo a Brazilian Butt-lift surgery.

The video of the crossdresser flaunting his new derriere at the time quickly generated several reactions online.

While some social media users said, Bobrisky took a great risk by undergoing surgery, others believe that he was lying and that the bum was fake.

The reality star later confirmed that he did not undergo any surgery to lift his buttocks. Albeit, Bobrisky has continued to make other bewildering claims on social media.

The Instagram dancer was trolled online and it prompted her to turn off comments on her Instagram page which boasts over 3.7 million followers.

Tonto Dikeh whose tumultuous love affair with Prince Kpokpogri ended in September, had slammed the dancer, revealing that her ex-lover saved her lewd tape on his smartphone.

Dikeh and Jane Mena engaged in a war of words on Instagram for nearly a month which ended in the latter threatening to file a lawsuit against the actress.

However, the episode ended after Prince Kpokpogri confirmed in a leaked voice note that he was involved in ‘dirty s3x’ with the married Instagram dancer.