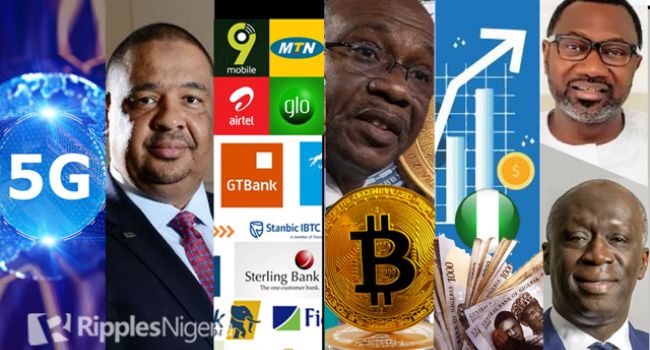 With the end of 2021, it’s time to go on a trip down memory lane of events that shaped the year in the business world.

This review brings back one significant event that happened in each month of the year 2022.

The year 2021 started with a scandal in the banking sector of Nigeria. How many times have you been told not to mix business with pleasure? but it seemed Adam Nuru, FCMB Chief Executive Director, didn’t get the memo.

Nuru, was accused of playing under the duvet with one of the company’s employee, Moyo Thomas, and this pleasure cost him his top job at FCMB, while it allegedly resulted in the demise of Thomas’ husband, Tunde Thomas.

While the affair resulted to a lost job and death, it birthed a seed that seemed to be an evidence or postal child of the affair between Moyo and Nuru, who was replaced by Yemisi Edun.

To read more about the deadly affair, click this link.

February – Breakfast in a month of love

When you hear February, what’s the first thing that comes to your mind – love right?, well, the Central Bank of Nigeria (CBN) decided to share breakfast (heartbreak) for crypto lovers.

It was a rude shock when the CBN announced on February 5 that bitcoin and other cryptocurrencies had been outlawed, directing banks to go after every account linked to digital currency.

This ban has been a spanner in the works for the crypto market in Nigeria, and as a result, there’s no love lost between CBN governor, Godwin Emefiele, and the Nigerian crypto community.

In case you missed the moment of the sledgehammer from CBN, click this link to be in the know.

March: Battle of Goliath vs Goliath

You are probably used to David and Goliath battle, but in March, the USSD war erupted between giants of two industries, the Nigerian banks and telecommunications companies.

In a bid to recover N42 billion debt from the Nigerian banks, Telcos decided to strong arm the lenders by kicking out the creditors customers from USSD platform – a case of the hunter becoming the hunted.

And when two elephants fight, you know the grass (bank customers) becomes collateral damage, hence, customers being unable to use banks’ USSD codes for some period of time.

If this disclosure came as a surprise to you, then click this link to avoid being behind on the battle of two Goliaths.

CBN governor, Godwin Emefiele, made an announcement that would have passed as an april fool stunt if there wasn’t video evidence – it sacked all directors at First Bank Nigeria Holdings, including the chairman.

It all started from the sack of Adesola Adeduntan by FBN Holdings board without the approval of the apex body. This decision led to a house cleaning in the lender, and Emefiele was the janitor.

CBN sacked over 10 directors in FBN Holdings and its subsidiary, and ever since, First Bank has been a house of commotion, with one management mess up after the other.

In case you don’t believe, click this link for proof of Emefiele’s onslaught in FBN

For two years, inflation had been on an upward swing, but it lost its footing on the hill, and started a free fall in May, resulting into its first drop since 2019.

The inflation rate decline announced in May was for the period of April. It dropped to 18.12%, and now currently stands at 15.40% for the month of November, even though it was reported not to reflect reality.

To know about the magic wand that pulled inflation rate down in its tracks, click this link.

Oil has been some sort of curse for the communities in Akwa Ibom, but in June, it became a blessing for them, as a court ordered that they should be paid N81.9 billion.

This amount was to be paid from the pocket of Mobil and the Nigerian National Petroleum Corporation, now known as the NNPC Limited.

The N81.9 billion was a compensation to the negative effects of oil exploration in the Akwa Ibom communities by the private oil and gas companies.

To read more about the court order, click this link.

A landmark court ruling threatened to cost the Federal Government and its tax agency, the Federal Inland Revenue Service (FIRS) over N1.64 trillion every year.

The plaintiff behind this was the Rivers State government, represented by its governor, Nyesom Wike, who was demanding that the court restrict the FG and any of its agency from collecting state-owned taxes.

The case has now developed into Southern States vs the FIRS and the Federal Government, as the Northern region are against the former’s decision.

How the court ruling will affect the FIRS and Northern states have been analysed in this link.

September – Barking at the wrong tree

CBN governor, Godwin Emefiele, shocked many in September when he claimed that forex aggregator, Aboki FX, was the reason behind the depreciation of naira value against the dollar.

Emefiele announced the founder of Aboki FX, Oniwinde Adedotun, wanted, and condemnation trailed the decision, with talks of CBN barking at the wrong tree.

Aboki FX has since stopped reporting or tracking the value of naira in the Bureau de Change or black market, but still, naira grows weaker against the dollar.

To know other offenses Emefiele listed against Adedotun, click here.

October – The battle between two billionaires

The business community came to a standstill in October when Femi Otedola and Tunde Hassan-Odukale battled for the control of First Bank Nigeria Holdings.

Following reports that Otedola had snatched the majority control, claims started flying in left, right and centre, to prove Hassan-Odukale owned the highest shares – this confrontation caused FBN to receive a query over its ownership tussle.

Although, Otedola has now officially become the owner of FBN after PENCOM dispelled Hassan-Odukale’s claim to shares owned by Leadway Assurance pensioners.

To know about the battle of the two billionaires, click here.

Despite facing some setback and not meeting its initial launch date, the CBN eventually gave Nigerians an Independence Day gift, eNaira.

Nigerians were warming up to bitcoin and cryptocurrencies before it was banned, and CBN decided to gift the country a non-interest yielding digital currency.

The move was heavily criticised, but Emefiele insisted Nigeria will have Africa’s first central bank digital currency (CBDC), and that came late in October, but later taken down from app stores and uploaded again in November.

To know why CBN believes eNaira is more important than cryptocurrency, click here.

This kicked off the process of network providers connecting Nigerians to the new generation network which has not been without its scandal.

To read about Airtel Nigeria’s shock loss in the 5G auction, click here

Bitcoin holders lose $50.34bn, as US attracts investors to bonds