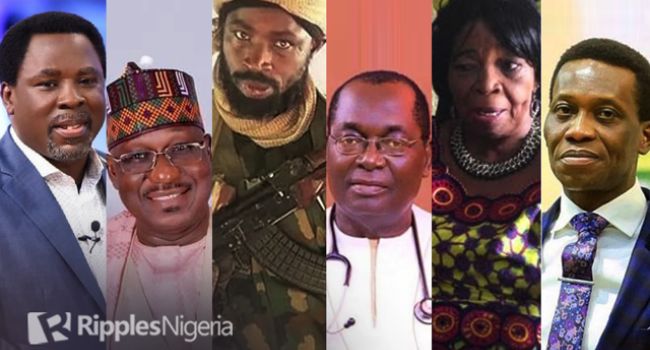 With COVID-19 almost suffocating the world in 2020, many had hoped that 2021 would be a better year bringing relief and a breathe of fresh air.

But on the contrary, the year seemed to be a worse version of the previous year, with cases of Corona virus infection increasing daily, new variants of the virus emerging, insecurity dominating parts of the country and high inflation rate which left people merely surviving.

Nigerians have been left to nothing but being grateful for the gift of life which is the ultimate. But even in the midst of merely surviving, life still gives sad news as Nigerians are occasionally greeted with news of the demise of prominent personalities who they in one way or the other looked up to.

In this Year in Review series, we take a look at some prominent Nigerians who abandoned the hassles of this world to join the great beyond within the year 2021.

The sudden death of Prophet TB Joshua took Nigerians by surprise in the early hours of Sunday June 6, 2021.

The renowned peacher and tele-evangelist whose death was announced through his church’s Facebook page died at the age of 57.

Until his death, Temitope Balogun Joshua was a Nigerian charismatic pastor, leader and founder of Synagogue Church of All Nations

Although the cause of his death was not disclosed, He reportedly suffered a stroke two months prior to his death and was flown to Turkey for treatment.

His funeral attracted a large crowd including dignitaries like Rotimi Akeredolu, governor of Ondo, and Lucky Aiyedatiwa, his deputy; Dele Momodu, media mogul and former presidential aspirant, among others.

He was buried within the church premises in Ikotun area of Lagos.

The gruesome murder of Chike Akunyili by unknown gunmen came as a rude shock to Nigerians on Tuesday, September 28, 2021.

He was reportedly killed in his early 60s alongside his police escort and one Aloysius, identified as his driver, on his way from a memorial lecture in honour of his late wife, Dora Akunyili.

Until his death, Akunyili was a medical director at St Leo’s Hospital, one of the largest in Enugu State.
The late Akunyili was laid to rest in Agulu, Anambra state.

Ibrahim Attahiru, the late chief of army staff (COAS) died at the age of 55 in an air crash near Kaduna international airport on May 21.

The three-star general died barely four months into his appointment as army chief alongside 10 other military officers as a result of bad weather.

Upon assumption of office, the late army chief had shown his readiness to combat insecurity in the country. He had said under his leadership, the army would do things differently to address security challenges in the country.

Attahiru’s demise made him the shortest-serving chief of army staff in Nigeria having served from 26 January 2021 to 21 May 2021.

The famous Nigerian rapper, singer and songwriter who was well known for his R&B, Hip-Hop, reggae and afrobeat died at the age of 44 on the 11th of July.

He was famous for using his music to speak against poverty, corruption, bad governance and societal ills in Nigeria.

Sound Sultan was also an actor who produced and acted in the successful comedy movie “Head Gone” in 2014. He also played the role of Rotimi, a lawyer in the popular comedy series, “flatmates”.

He was in the United States of America receiving Chemotherapy and diagnosed with Angioimmunoblastic T-cell Lymphoma in the throat which later took his life.

The report of his death was met with mixed feelings – while many were elated, some were doubtful about the genuineness of the news owing to the fact that the army had claimed, on several occasions, to have killed Shekau but the Boko Haram leader resurfaced in online videos, debunking the claims.

The Islamic State West African Province (ISWAP) a breakaway faction of Boko Haram, confirmed the death of Shekau, former leader of the terrorist group. He was said to have blown himself up on May 19 following a confrontation with ISWAP fighters, when he observed that the ISWAP fighters wanted to capture him alive.

Although the army said it could not confirm if he was truly dead, many Nigerians had hoped he remains dead.

Shekau was the leader of Boko Haram terrorist group in Nigeria until his death in May.

The former aide of ex-President Goodluck Jonathan was shot dead by gunmen in May while returning to Abuja from Owerri, the Imo state capital.

His death caused a ripple in the political space as there were speculations that his killing was politically motivated.

The police upon investigation said Gulak left his hotel without any security detail in spite of the insecurity in the state. The state had been witnessing a series of violent attacks.

Bala Elkana, the Imo police spokesman, had said six “armed bandits” ambushed Gulak’s car at Umueze Obiangwu in Ngor-Okpala LGA while he was on his way to the airport.

The police also alleged that members of the proscribed Indigenous People of Biafra (IPOB) were behind the murder, adding that its personnel trailed the attackers and “killed some of them in a shootout”.

IPOB, however, denied the allegation.

Gulak was until his death a chieftain of the All Progressives Congress (APC).

Hajiya Hadiza, the wife of a former president, late Shehu Shagari died at 80.

The family head, Muhammad Bala Shagari, said in a statement: “We lost her in the early hours of Thursday at about 3.00am, after battling COVID-19 at the Gwagwalada Isolation Centre in Abuja.”.

She died at Federal Medical Centre Umuahia after suffering a stroke.
Her husband, and the Supreme Commander of the National Military Government, was killed on July 29, 1966.

Pastor Dare Adeboye died at the age of 42 without prior symptoms of sickness and was never on medication.

Dare who pastored one of the RCCG branches in Abuja was said to have officiated on Sunday and retired to his bed after church. He reportedly warned that he should not be disturbed during his rest before his sudden death.

The third child of the General Overseer of The Redeemed Christian Church of God (RCCG), Pastor E.A. Adeboye, died in his sleep on 4th May in his home in Eket, Akwa Ibom State.

The 42-year-old, who was the Assistant Pastor in charge of Region (Youth) 35 before his death, is survived by his wife and three daughters, and his remains was buried in the presence of friends, family, and church members, after a Farewell Service at the Youth Centre, Redemption Camp, along the Lagos-Ibadan Expressway..

The disturbing news of his demise was confirmed by the President of the Actors Guild of Nigeria, Emeka Rollas who said he suffered from a stroke for sometime which was managed but later took his life in the early hours of Thursday 23rd December.

The actor has featured in lots of Nollywood movies. Sam Obiago hails from Asaba, Delta State in the south southern part of Nigeria. Unfortunately, he has joined the list of actors who gave up the ghost in 2021.