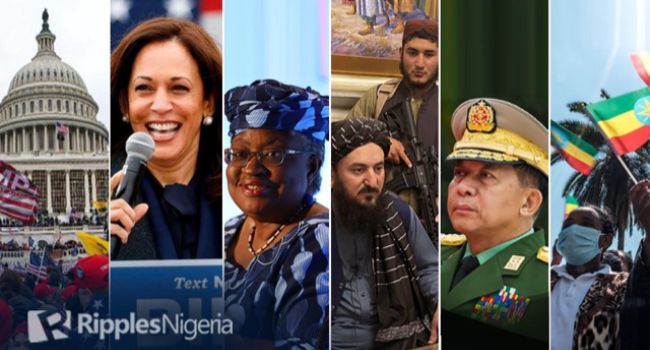 The year 2021 may have passed by but its impacts and footprints the world over will still be talked about for years to come.

The defeat of former United States President Donald Trump did not come without some unpleasant outcomes as was witnessed on January 6, when a mob of pro-Trump demonstrators stormed the U.S. Capitol in an effort to stop lawmakers from certifying the results of the 2020 presidential election which had Joe Biden as the clear winner.

In the riot that followed, five people lost their lives in the chaos, including a Capitol police officer. Lawmakers from both political parties, including the then Vice President Mike Pence, were forced to flee the congressional chamber for safety.

Trump also made history as the first U.S President to be impeached twice, though he was acquitted on both occasions.
More than 600 people were later charged for their roles in the insurrection, with the House establishing an independent committee to investigate the attempt to disrupt the peaceful transfer of power.

2. Kamala Harris made history as first black woman to become US Vice President

Harris has a track record of being the first as she was also the first black person and first woman to become district attorney of San Francisco, and later attorney general of California, and in 2016, she was elected the first Black senator from California.

On his part, Joe Biden also made history as he became America’s oldest President at the age of 79 on his first inauguration.

The year 2021 was also famous as it saw a number of notable world leaders leaving power either by way of dethronement, election loss or being toppled in coup d’états.

The first of such important transfer of power around the globe began with a military coup in Myanmar in February, which toppled the popularly elected government of Nobel Prize winner, Aung San Suu Kyi, who was promptly thrown into jail by the military on corruption charges.

In April, Cuba’s dictator, Raul Castro stepped down as head of the Communist Party, ending an era of leadership that began with his brother, Fidel Castro’s victory in the Cuban Revolution in 1959.

In June, Israeli strongman, Benjamin Netanyahu, who was the country’s longest-serving Prime Minister, was defeated by unassuming politician Naftali Bennett in an unprecedented manner which saw Netanyahu lose to his former Minister of Diaspora Affairs and Defence.

4. The Taliban return to power

Twenty years after the United States entered Afghanistan and removed the Taliban regime, the US war ended and the Taliban found itself back in power. In 2020, President Donald Trump had struck a deal with the Taliban that required the withdrawal of all U.S. troops by May 1, 2021.
But two weeks before that deadline, new President Joe Biden ordered that a complete U.S. withdrawal be concluded by no later than September 11, 2021, being the 20th anniversary of the September 11, 2001, attacks which saw a series of airline hijackings and suicide attacks committed by 19 militants coordinated by the militant Islamist terrorist group, al-Qaeda, against the United States.

As the withdrawal of the U.S. troops took a gradual process, the Afghanistan national army collapsed and the Taliban overran the country, with the capital Kabul falling on August 15, trapping thousands of foreigners in the capital city.

The U.S. withdrawal ended on August 30, leaving behind more than one hundred U.S. citizens and as many as 300,000 Afghans who may have qualified for expedited U.S. visas.

It is on record that the United States had spent more than $2.3 trillion on Afghanistan over two decades, or roughly $300 million a day for the 20 years it was in the country, while more than 2,500 U.S. service members and 4,000 U.S. civilian contractors reportedly died in the Asian country.

Despite the fact that Ethiopian Prime Minister Abiy Ahmed was awarded the 2019 Nobel Peace Prize for brokering peace with neighboring Eritrea, the country has been engulfed in a devastating war with the Tigray region which has led to thousands killed or displaced.

The war was escalated when, in November 2020, Abiy ordered the Ethiopian military to attack the northern province of Tigray after forces linked to the Tigray People’s Liberation Front (TPLF) looted a federal army base.

But in 2021, the war attained such a proportion that the United Nations continued to warn of humanitarian crisis that could see millions of Ethiopians dying of hunger. The bad blood between Abiy and the TPLF led to the war in the Horn of Africa going out of proportion with neither side willing to sign a peace treaty.

In June 2021, TPLF forces had recaptured one of Ethiopia’s major cities, Mekelle, and by November, the TPLF and affiliated militias were advancing south toward Addis Ababa, Ethiopia’s capital, and east toward Djibouti, threatening to cut off the route that supplies Ethiopia with 95 percent of its maritime imports.

However, the consequences of the civil war on the world has been horrific with more than two million Ethiopians displaced, while all the parties to the conflict have been accused of committing war crimes like ethnic cleansing, massacres, and gang rapes, as diplomatic efforts to end the fighting went nowhere.

In February, 2021, Nigeria’s Dr. Ngozi Okonjo-Iweala made history as she was elected the Director-General of the World Trade Organization, making her the first woman and African to attain the position.
Her appointment which took effect from March 1, meant that she would be on the coveted seat till August 2025, at the very least.

The WTO General Council decision followed months of uncertainty which arose when the United States initially refused to join the consensus around Okonjo-Iweala and threw its support behind Republic of Korea Trade Minister, Yoo Myung-hee.

But following Yoo’s decision to withdraw her candidacy, the administration of newly elected U.S. President Joe Biden, dropped the U.S. objection and announced instead that Washington would extend its “strong support to the candidacy of Dr Okonjo-Iweala.”

While welcoming her into her new role, the General Council Chair, David Walker of New Zealand, said:
“This is a very significant moment for the WTO. On behalf of the General Council, I extend our warmest congratulations to Dr. Ngozi Okonjo-Iweala on her appointment as the WTO’s next Director-General and formally welcome her to this General Council meeting.”

7. COVID-19 and its different variants

The COVID-19 pandemic was not to be outdone in the year 2021 as the disease saw the coming of new variants which ravaged the world to no end. As the year began, nations of the world were still firmly in the grip of Coronavirus which first emerged in late December 2019 and spread around the world like wildfire and by 2020, had prompted lockdowns, global recession and upheaval on an unprecedented scale.

But by 2021, new mutations had emerged with the arrival of the more contagious Delta variant of the virus which accounted for many of the deaths recorded despite efforts by scientists to develop vaccines to tackle the virus.

But towards the end of the year, in November to be precise, another highly contagious variant, Omicron, emerged, with the first discovery made in South Africa.

As usual, Europe panicked and clamped down on many African countries, including Nigeria, and 11 other countries on the continent, by restricting visitors and flights from the affected countries.

The year 2021 also brought upon the world an unprecedented turmoil in the South American country of Haiti which saw the President being killed by unknown gunmen.

In July, the assailants who posed as agents of the U.S. Drug Enforcement Administration (DEA), burst into the home of President Jovenel Moïse, killing him and seriously wounding his wife.

Barely a month later, as the country was still trying to come out of the tumult, a 7.2 magnitude earthquake hit southwestern Haiti, followed by flash floods, leaving more than 2,200 people dead and displacing tens of thousands more in a nation already suffering from widespread poverty and hunger.

Again in September, after tens of thousands of Haitian refugees gathered at the U.S.-Mexico border, the U.S. government, using its border agents, rounded up the migrants and deported them back to the country they were fleeing from, drawing a lot of criticism from the rest of the world.

It was a bumpy and rough year for Facebook as the platform grappled with serious concerns about its struggles to adequately protect data and limit hate speech, misinformation and other disreputable content.

The world’s largest social network platform was confronted with a flood of issues in 2021, beginning with the U.S. Capitol Building insurrection and its subsequent decision to indefinitely suspend the then President Donald Trump.

This was followed by leaked documents by former Facebook employee turned whistleblower, Frances Haugen, who revealed more damaging information about the impact of the company’s platforms on young users’ mental health.

Finally, Facebook announced that it was rebranding itself as Meta to reflect a focus on the metaverse, a virtual reality space where users interact with each other amid a computer-generated environment.

In December, 35-year-old Gabriel Boric was elected as Chile’s president, becoming the world’s youngest president in the process. The former student leader, who, a few years earlier, was leading nationwide protests against the Chilean government, received 55.87 per cent of the vote to defeat his opponent, Jose Antonio Kast, who received 44.13 per cent of votes, according to the Chilean Electoral Service.

Boric, a shaggy-haired student who rose to popularity in Chile a decade ago as a leader of enormous demonstrations demanding free quality public education, was born on February 11, 1986 in Punta Arenas, Chile’s extreme south.

He was a law student at the University of Chile at the time, but he never finished his degree because of the series of protests, and instead chose to focus on politics. He was elected to Congress as an independent candidate in 2013, representing his Magallanes province, and was later re-elected with a landslide victory for a second term.

The significance of leftist Boric’s election victory was one of the most polarised in Chile’s history, with various socio-political and economic variables contributing to this.

Boric had capitalized on President Sebastián Piera’s government doubling transportation charges and jerking up prices of common commodities which sparked a cycle of endless protests in the country, especially the capital Santiago, which subsequently extended across the country and included resentment about rising inequality, privatisation, and rising living costs.