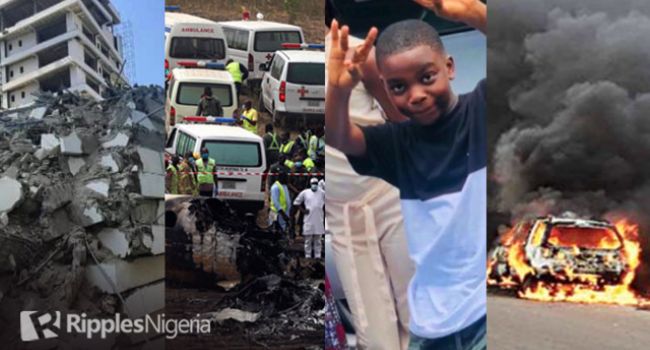 The year 2021 came with much trepidation in the hearts of Nigerians who were skeptical about what to expect. The impact of Covid-19 left the people no choice but to adapt to the current realities. To the average Nigerian, the series of unfortunate events had become a norm in the country. The pages of newspapers, blogs and social media platforms were daily awash with gruesome stories of these events.

From several attacks by ISWAP to construction hazards and transportation accidents, 2021 was full of events with tragic occurrences. Let’s not forget the increased rate of kidnapping and reign of terror by unknown gunmen and bandits.

In this Year in Review series, we recount the major tragedies that happened in 2021 Nigeria.

Nigeria’s military has battled the insurgency by the Islamist group Boko Haram that has devastated the north, killing at least 36,000 people and displacing more than two million. The emergence of the Islamic State West Africa Province (ISWAP) which split from the Boko Haram did not make it easy for Nigerians even as the group became the more powerful force.

On February 23, Boko Haram militants fired a series of rocket-propelled grenades into Maiduguri, Borno State, Nigeria. The attacks killed at least 10 people; many others were injured. The Maiduguri airport was severely damaged in the aftermath of the attack.

On April 25, fighters from the ISWAP attacked a convoy with rocket-propelled grenades in the town of Mainok outside the regional capital Maiduguri before storming the nearby base. In an attack against the Nigerian army, the insurgents dressed as military men, stole several MRAPs and inflicted serious damage on troops and equipment.

It became deadly when Air Force fighter jet intended to respond against the terrorists, mistakenly shot down military officers killing 20 in total. After the attack, the Nigerian military lost 33 soldiers.

Another case of mistaken identity was when an air strike on Daban Masara hit a fish market in the village of Kwatar Daban Masara, Borno State on September 26, killing between 50 to 60 people. The military had targeted ISWAP members who, according to intel, were in that region. However, the strike ended up killing innocent fishermen.

A Beechcraft KingAir B350i aircraft crashed on February 21 while returning to the Abuja airport after reporting engine failure en route to Minna. Eye witnesses described the crash as terrifying, stating that only the charred remains of the airplane could be seen and the smell of burning chemicals lingered in the air. All seven personnel on board died in the crash.

Another sad day on record was on May 21 where another Nigerian Air Force Beechcraft King Air 350i with Chief of Army Staff, Ibrahim Attahiru and ten other occupants crashed near the Kaduna International Airport, killing all on board.

The series of attacks by the so-called unknown gunmen cannot be forgotten in a hurry. Many lost their lives and the government delved into more confusion while trying to unmask the gunmen.

On the same day, February 7, gunmen killed 14 people in Kutemeshi and five people in Kujeni, both in Kaduna State, in raids that resulted in burnt houses and a church.

The Owerri prison break which took place on April 5, was a major attack by gunmen. Due to massive nature of the heist, the federal government termed it a terrorist attack. The group arrived in pickup trucks carrying explosives, machine guns and rifles and released over 1,844 inmates from the jail.

On June 11 and 12, a group of gunmen on motorcycles attacked the villages of Kadawa, Kwata, Maduba, Ganda Samu, Saulawa and Askawa in the Zurmi local government area of Zamfara State in northwestern Nigeria, killing 53 people mostly farmers.

Following the end of the “sit at home” orders regularly imposed on the South East, by the Indigenous People of Biafra (IPOB), there were attacks on citizens at Oko, Agulu, Obosi, Nkpor, Nnobi, Nnewi and other places in Anambra state that left about 10 people dead. A notable death was that of Dr Chike Akunyili, husband of the late Professor Dora Akunyili, who was reportedly gunned down at Nkpor. From September 26 to September 30, the state was thrown into a state of unrest due to the complex gunmen attacks.

In the mass shooting that took place in the village of Mazakuka in the Mashegu area of Niger State, more than 15 worshippers and an Imam were killed with four injured. The gunmen attacked a mosque on October 25.

The rate of kidnappings in Nigeria skyrocketed with bandits abducting students regardless of rich or poor, and asking for ransoms.

On February 17, bandits gained entry into Government Science College in Kagara town of Niger and abducted 27 students, three staff members and 12 family members. One student, Benjamin Doma was killed by the bandits during the rampage. The victims were released after ten days, with stories to tell.

Nine days later in Zamfara, 279 female students aged between 10 and 17 were kidnapped by bandits. The kidnapping occurred at the Government Girls Science Secondary School, a boarding school in Jangebe on February 26. According to the state governor, Bello Matawalle, the girls were released on March 2 with no ransom paid for their release.

The abduction of 136 little children from the Salihu Yanko Islamiyya School in Tegina, Niger State, was another tragic story. Although the pupils were released, it was after 88 days in captivity and six of them died from stress and exhaustion. The bandits had demanded N70m and six motorcycles which parents scurried to get.

Kaduna state was the headquarters of abductions and terror in 2021. From Bethel Baptist Secondary School, Kaduna where 121 students were taken and 31 still in captivity, to the Federal College of Forestry Mechanisation and Greenfield University, both also in Kaduna, students were also taken and some never returned.

Boat disasters in Kebbi and Bagwai

It was a sad and sorrowful day on May 26 where more than 90 people were declared dead and others missing after an overloaded boat capsized in Ngaski Local Government Area of Kebbi state.

Reports stated that the overloaded boat was carrying between 150 and 200 passengers, mainly women and children, traveling between Niger state and Wara in Kebbi. After the accident, 76 bodies were recovered while 20 people survived with injuries. Some families lost more than one child.

This incident generated both local and international attention as it was regarded as one of the deadliest boat accidents in Nigeria.

On November 30, an overloaded boat carrying more than 50 people, mostly children aged between 8 and 15, capsized on the Bagwai River in Kano State.

The boat was said to be carrying Islamic school pupils from Badau village to the town of Bagwai on the other side of the river for a religious ceremony. The Kano State Governor Abdullahi Umar Ganduje described the incident as “a state tragedy” as 29 were confirmed dead.

On November 1, a 21-storey building under construction on Gerrard Road, Ikoyi area of Lagos collapsed, leaving 44 dead, 15 survivors and many more unaccounted for.

It took days and a rescue exercise conducted by the National Emergency Management Agency (NEMA) to recover the bodies of victims including that of the building developer, Mr Femi Osibona. The families of victims went through the devastating process of identifying the bodies of their loved ones with some victims still not accounted for.

Following investigations by the state government, it was found out that the edifice was approved to be a 15-storey building but 21 floors were constructed. This revelation sparked controversies which pointed to the greed and corruption that is laced in every sector in the country.

The Ikoyi building tragedy was only one of many building collapses that happened in Nigeria. In a shocking turnout, a two-storey building collapsed on November 2 in Osapa London, in the Lekki area of Lagos but with no casualties. Another building caved at Flour Mill Estate, Magbon, in the Olorunda Local Council Development Area in Badagry, killing four.

Nigerians came to a new understanding of how the acts of bullying and abuse have become rampant in schools. This was sparked majorly by the case of Sylvester Oromoni Jnr, of Dowen College, Lekki, Lagos, who also died after an alleged bullying and fatal beating from senior students.

On November 30, a 12-year old student of Dowen College died after sustaining injuries from a beating and complications of chemicals in his system. According to reports, the boy was severely bullied and asked to join a cult by senior students. When he refused, the senior students allegedly forced him to drink engine oil and beat him mercilessly.

The death of the school boy caused an uproar by Nigerians who advocated for #justiceforsylvester and that all the senior students be reprimanded.

In what was described as a gory horrific accident, a truck on December 7, rammed into school pupils in the Ojodu Berger area of Lagos state, killing over 10 children and injuring others.The pupils were reported to be of Omole Primary School and Babs Fafunwa’s Secondary School.

Eyewitness accounts stated that the truck driver was trying to evade an official of Lagos State Traffic Management Authority (LASTMA) and he lost control of the vehicle. Those who witnessed the accident were left stunned at the sight of bodies in bloodied school uniforms.

This tragic incident sparked reactions from Nigerians who called out LASTMA who denied any involvement and tasked the government to bring the culprits to book.

IPOB does not speak for Igbos, Ohanaeze reacts to beef ban