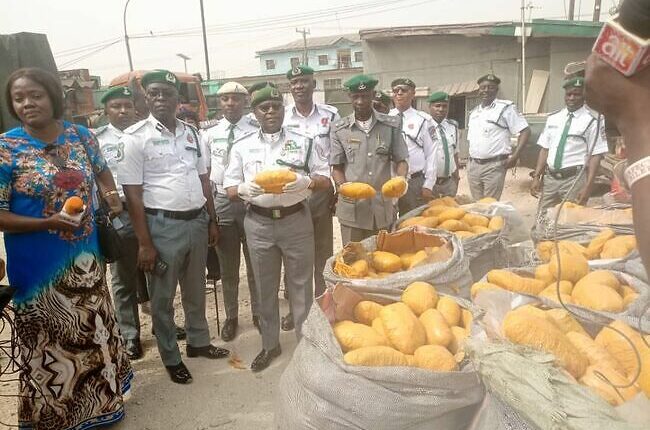 The Nigeria Customs Service (NCS) has revealed that four of its operatives lost their lives in the year 2022, in the fight against smuggling.

This was made known by Hussein Ejibunu, Controller of the Federal Operations Unit, Zone A, during a media briefing on Thursday, in Lagos, while giving a recap of activities for 2022.

He further revealed that the service made a total seizure of smuggled items worth N13,908,575,436.5 in the South-West part of the country.

Ejibunu explained that his Unit prevented loss of government revenue as its assigned position of being a layer of check uncovered attempts at evading duties.

“We recovered the shortfalls through Issuance of demand notices (DN).

“We did all these at the expense of our lives placing national interest ahead of any narrow or personal gain. It is sad to note that some of our officers paid the supreme price last year when they got killed by smugglers. For us, they are the heroes of the anti-smuggling battle and they will never be forgotten.

“Aside protecting the national economy, some of the seizures achieved protection of citizens’ health because dangerous, expired and harmful products were prevented from being smuggled into the country.

READ ALSO:Customs seizes N468m worth of contrabands within four months in Bauchi

“In terms of volume, rice topped the list of our seizures. We seized 93,102 by 50kg which amounts to about 156 trailer loads of rice. Even our newly constructed warehouse had an overflow of seized rice.

“Illicit drugs seized are, 7,354 kg and 4,975 tablets of Cannabis sativa, 233 cartons by 225 milligrams, and 82 packs by 225 milligrams of Tramadol. It is pertinent to remind us that these hard drugs fuel crime and insecurity.

“For petroleum products, this Unit seized 656,414 liters of premium motor spirit (PMS); that is, about 20 tanker loads of fuel from economic saboteurs who seek to impoverish the majority of our country people by taking out petrol subsidized for citizens’ benefit to be sold in other countries,” he stated.

The Customs Chief further disclosed the details of the tallen operatives while assuring justice would be served.

“On a sad note, four of our officers namely: Late inspectors of Customs TP Astor and A. Onwueguzie; Assistant Inspectors of Customs, Musa, R. and Bristol E. lost their lives in active service while confronting smugglers last year. While we frowned at such murderous acts, we also ensured that those behind some of the killings were arrested to face justice.

“While on our enforcement function, we recovered shortfalls in duty payments and achieved a total collection of N878,344,486,96 as revenue for the government in 2022.

“This collected revenue would have been lost but for the intervention of FOU ‘A’, checking to be sure correct duties were paid into government coffers,” Ejibunu revealed.