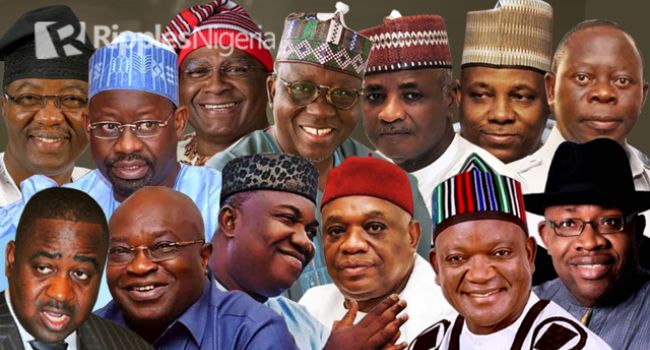 The past few weeks have been full of intrigues in Nigeria’s political space as the two major parties; the All Progressive Congress (APC) and Peoples Democratic Party (PDP), conducted their primaries for governorship, senatorial and House of Representatives aspirants in different states of the federation.

No fewer than 10 governors won the tickets in the eventful exercise to pursue their re-election bids in the 2023 general elections. For those unable to return to the government house due to constitutional provisions, they have found other outlets to stay active politically.

It is not new in Nigeria to see politicians leaving one elective position for another to continue to wield influence. In the case of governors who are about to complete their terms they resort to senatorial positions as a way of maintaining their relevance in the system.

This trend is not only unique to about-to-complete-tenue governors, former governors bent on remaining relevant in the political scene use the Senate as backups, especially if their chances of getting other political positions are slim.

We take a look at 19 governors and ex-governors who have secured tickets from their parties’ primaries conducted across the states of the federation to contest for the Senate in 2023 general elections.

Abubakar Yari, who will be jostling for Zamfara North senatorial seat, ruled Zamfara between 2011 and 2019. He was a member of the defunct All Nigeria Peoples Party (ANPP) under which he won his first tenure. He later joined the APC and won a second tenure in 2015.
This is not Yari’s first attempt at joining the Senate. Towards the tail end of his second tenure as governor, he contested and won a seat at the Senate. But that move was nullified by the Supreme Court on the grounds that he, and some others who contested elections in the state were not validly nominated via state primaries.

Lalong, who won the APC ticket to represent Plateau south senatorial district in 2023, was a former lawmaker in the Plateau State House of Assembly. He became state assembly speaker between 2000 and 2006.

Lalong emerged the governor in 2015 to succeed Jonah Jang and was re-elected in 2019.

Umaru Tanko Al-Makura became the governor of Nasarawa state in 2011 and ruled for eight years. He is a sitting senator who has successfully secured the ticket to contest for another term at the Senate.

Aliyu Magatakarda Wamakko won the governorship election in Sokoto state in 2007 on the platform of the People’s Democratic Party (PDP). His tenure ended in 2015. He won the senatorial seat in 2019 and now a ticket for his bid to return to the Senate on the platform of APC.

Adams Aliyu Oshiomhole, the former national chairman of the APC, became Edo State governor in 2008 under Action Congress Party (ACP). His tenure elapsed in 2016, and was elected as AOC national chairman in 2018. He was however suspended from office by a court ruling in 2020. He has obtained the APC ticket to feature in 2023 elections for Edo north senatorial contest.

Egwu ruled Ebonyi state between 1999 and 2007 on the platform of the PDP. He was appointed the Federal Minister of Education in 2008 by the Umar Musa Yar’adua administration. He found his way into the Nigerian Senate in 2015, and will be seeking re-election in 2023.

Gbenga Daniel was the 14th governor of Ogun State who ruled between 2003 and 2011 under the PDP. After joining the ruling APC in February 2021, the former governor would be jostling for Ogun East senatorial seat in 2023 under the same political platform.

Read also: Politicians called me to contest election, but swindled me of all my savings –Ex-IGP, Okiro

A former Commissioner Kashim Shettima succeeded Ali Modu Sheriff in 2011 as Borno State governor under the All Nigeria Peoples Party (ANPP). He won election to represent Borno Central at the Senate in 2019, and seeking re-election in the 2023 general elections.

The incumbent governor of Niger State, Abubakar Sani Bello, defeated Aliyu Sabi, a legislator representing Niger north senatorial district, in the APC primary last week. He was elected governor in 2015 and got re-elected in 2019. He will be leaving for the Senate, hopefully, in 2023.

The 58-year-old politician was elected on the platform of the PDP in 2015 and re-elected in 2019. Ugwuanyi is a former member of the House of Representatives. He served two terms as a legislator representing Igboeze north/Udenu federal constituency. Like most outgoing Nigerian governor, Ugwuanyi is eyeing the Senate in 2023.

Ikpeazu will be in the ring in Abia south senatorial election in 2023 with Enyinnaya Abaribe of the All Progressive Grand Alliance (APGA), the former senate minority leader who recently defected from the PDP over his failure to secure the senatorial ticket.

Dickson is a multi-layered politician. A former Attorney General of the state and ex-member of the House of Representatives, Dickson emerged the governor of Bayelsa State in 2012. Having completed his tenure in 2020, Dickson contested and won a senatorial seat the same year. He is seeking re-election into the Senate in 2023.

An incumbent senator who ruled Benue State as a governor between 2007 and 2015 under the People’s Democratic Party (PDP), Suswan will be seeking re-election into the Senate in 2023.

Saminu Turaki was in charge of Jigawa State for eight years, between 1999 and 2007. He immediately secured the ticket to run for the Senate to represent Jigawa West in 2007 and won. He completed his tenure in 2011.

Turaki, who recently defected to the All Progressive Congress (APC), made a return to the PDP where he got the ticket of the party to vie for a senatorial seat following the withdrawal of Nasir Umar Roni.

Prior to his emergence as the number one citizen of Benue State in 2015 under the APC, Ortom served as the minister of industry, trade and investment in the administration of former President Goodluck Jonathan.

The governor, who is due to complete his second-term tenure next year under the PDP, is the Benue North-West candidate for the 2023 senatorial election.

Dakwambo was elected the governor of Gombe State in 2011. When he completed his tenure in 2019, he sought a seat in the Senate but was defeated by the incumbent, Senator Saidu Ahmed Alkali of the APC. With his emergence as the PDP flag bearer, Dakwambo keeps his ambition alive ahead of 2023 elections.

Nnamani came to power as a governor of Enugu State through election in 1999 and finished his tenure in 2007. He immediately secured a seat in the Senate the same year and spent four years. He was re-elected the Senator for Enugu East in 2019 on the platform of People’s Democratic Party (PDP). Nnamani is seeking senatorial re-election for the third term in the 2023 general elections.

He defeated Abubakar Sani Danladi of the All Progressives Congress (APC), his main challenger at the time, to clinch office for a second term in 2019.

Ishaku will be leaving office in 2023 to contest the senatorial seat of Taraba West in 2023 general elections.

Bagudu was first elected to the red chamber in the 2008 by-election following Adamu Aliero’s appointment as the minister of the federal capital territory (FCT).

He ran successfully for re-election in 2011 on the platform of the PDP.

In 2014, on the eve of the 2015 general election, Bagudu defected to the APC and secured the party’s governorship ticket. He won the election in 2015 and was re-elected in 2019.

Should he win in 2023, the governor will be returning to the Senate after an 8-year break.

A former governor who served two terms of four years each, Kalu is the incumbent chief whip of the Senate.
He once took a shot at the presidency in the 2007 general election under the platform of the Progressive Peoples Alliance (PPA).

Kalu secured the APC ticket to vie for Abia North senatorial seat unopposed, after a primary election where as two other aspirants to the office, Fabian Nwankwo and Ijeagu Emeaba voluntarily stepped down for him.