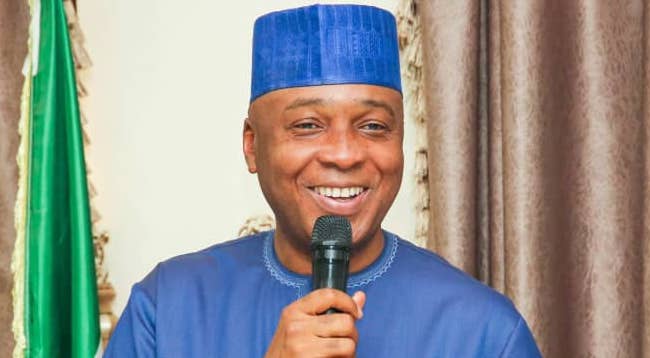 Former Senate President Bukola Saraki has joined the debate for which zone should produce the next president of Nigeri.

He stated that it was the North-Central geopolitical zone’s turn to govern the country as politicians jockey for the presidency in 2023.

Saraki states this while addressing delegates from Plateau State on Tuesday in Jos, ahead of the Peoples Democratic Party (PDP) primary elections scheduled for May.

The former governor of Kwara, who is one of many candidates vying for the PDP ticket, said the North-Central has continuously backed other areas in leading the country and deserved similar support this time.

“You remember that before the national convention of our party, we held a meeting in Abuja with delegates of North-Central extraction.

“We said to ourselves that for many times and many years, we, in the North Central, have worked hard, we struggled, used our efforts, used our money, used our energies to support other people to lead.

“Everybody, who had become President under this great party, got the seat because of our massive sacrifices.

He remarked that the North-Central had capable hands to address the country’s numerous concerns.

If given the chance, Saraki said he would administer an open administration that would be transparent and fair to all Nigerians.

The presidential candidate claimed that Nigeria’s security and other problems grew out of control due to a lack of accountability among those in charge of dealing with them.

“The problem of insecurity in Nigeria is because there has been no accountability.

“People have done things and nobody was held accountable for their failures.

“When I was Senate President, we sat down with security agencies and drew a roadmap on how to address the issue of insecurity, but the report was abandoned,” he lamented.

Ahead of APC primaries, Buhari to host Tinubu, other party leaders at Iftar dinner