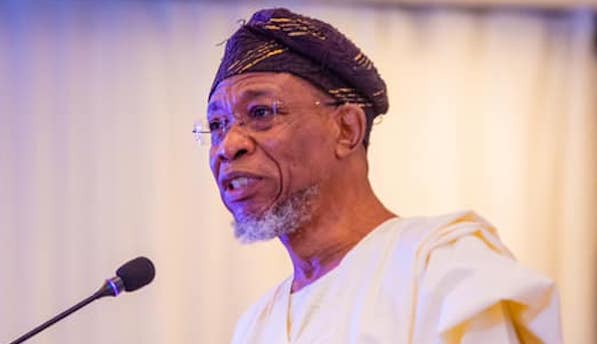 The Minister of Interior, Ogbeni Rauf Aregbesola has revealed ongoing reconciliation moves with the presidential candidate of the All Progressives Congress, Bola Tinubu, ahead of the 2023 general elections.

However, Aregbesola alleged that some saboteurs were working against the unification of disparate ranks within the party for their nefarious objectives.

The former Osun State Governor made this assertion on Wednesday, via a statement issued by Sola Fasure, his media aide, titled, ‘Jittery Politicians Scared of Full Reconciliation.’

Aregbesola further noted that these saboteurs kept disseminating reports that he’s attacking or has once attacked Tinubu, targeted at maligning his person.

The statement read, “The attention of The Media Office of the Minister of Interior has been drawn to social media news ascribing false statements to Ogbeni Rauf Aregbesola, as concerns an attack on the person of the presidential candidate of our Party, The All Progressives Congress , Asiwaju Bola Ahmed Tinubu. This is FAKE news and simply not True.

“A pattern has clearly emerged of sinister and coordinated effort to frustrate the reconciliatory moves being championed by notable stakeholders within and beyond our party to rally all necessary factors for the success of our Party at the February 2023 Presidential Election.

“Just last week, jittery politicians who are authors of this malicious manuscript, paid a handful of rent-a-crowd comedians to react to a non-existent ‘attack’ and regurgitate the storyline again, with the intention to frustrate a series of reconciliation steps for their selfish interest.

“We urge well-meaning Nigerians to be wary of the evil machinations of this cult of fifth columnists, whose sole business is to cause disaffection, manufacture distractions and sow discord within the APC and the progressive fold.

Despite the statement, it will be recalled that the Minister had a well-publicized feud with Tinubu, during the run-up to the Osun State governorship elections.

Aregbesola, while addressing party loyalists in Ijebu-jesa in February 2022, said he acquiesced to Tinubu’s handpicked candidate as his successor in 2018 because it was agreed that he would continue the legacies he laid.

Upon assumption of office, however, Governor Gboyega Oyetola failed to keep the agreement, according to the minister.

Mr Aregbesola said the same treatment Mr Tinubu and his group meted out to former Lagos State governor, Akinwunmi Ambode, will be given to Mr Oyetola because “he had derailed from the master plan too.”

“That was how it was in Lagos at a time; a governor derailed and the party members unseated him using the ballot boxes,” said Mr Aregbesola, addressing his supporters in Yoruba language.

“As it was in Lagos yesterday, so shall it be in Osun today. What is good for the goose is also good for the gander,” he had said.

Four years later, FG inaugurates Onochie, others into NDDC board