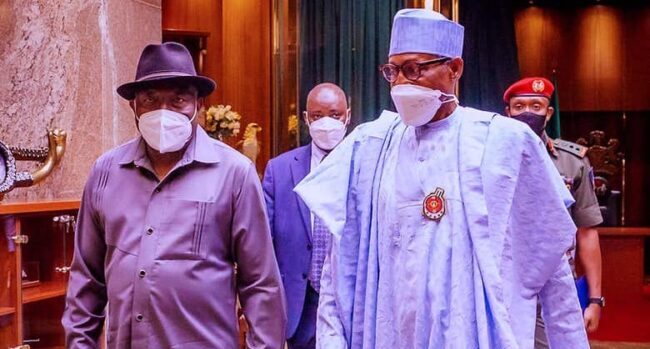 Leader of apex pan-Yoruba socio-political group, Afenifere, Ayo Adebanjo, has warned former President Goodluck Jonathan, not to allow himself be rubbished by those clamouring for him to contest the presidency in 2023 on the platform of the ruling All Progressives Congress (APC) insisting that he is only being deceived by President Muhammadu Buhari.

Pa Adebanjo who gave this warning at ‘The Greater Nigeria Conference” held in Abuja on Monday, said the respect Jonathan has garnered from Nigerians and the rest of the world will be totally rubbished if he allows himself to be used by Buhari and the APC who only want to use and dump him.

While speaking at the event organised by the ‘Igbo Think Tank’ group to drum up support for Igbo presidency in 2023, Pa Adebanjo said while those in charge of Nigeria’s political future know the right thing to do, they, however, do not want the South-East to lead the country.

He also chastised Jonathan for even allowing the rumour of his purported presidential interest to linger, saying he had allowed himself to be disgraced by coming out to say he was even considering whether or not to enter the contest for 2023.

“The unfortunate thing is that President Goodluck Jonathan allowed himself to be disgraced by mentioning the fact that ‘I am considering whether to be president or not.’ For what?,” Pa Adebanjo wondered.

“Buhari is only deceiving him and if he is not careful, he will have his integrity rubbished.

“I have even told Tinubu himself, not in the papers, face-to-face. ‘You believe this man (Buhari) will make you President?’ He said ‘yes’.

“I said ‘he wants to make you President and yet he asked (Yemi) Osinbajo to contest? He asked (Kayode) Fayemi to contest, he asked Amosun (Ibikunle) to contest?’ All in the West, why? He wants to divide the West first.

“Now that it is the turn of the South-East, they are propounding a new theory, it must be based on merit and all that. If it is the question of merit, who in the North qualifies to lead Nigeria? If it has been based on merit, the East alone would produce the President.

“The North doesn’t want to leave power. While the South is slugging it out, they put their candidate up.

“We all know the truth. They don’t want the South-East. It is not because they don’t know what is right,” the Afenifere leader said.