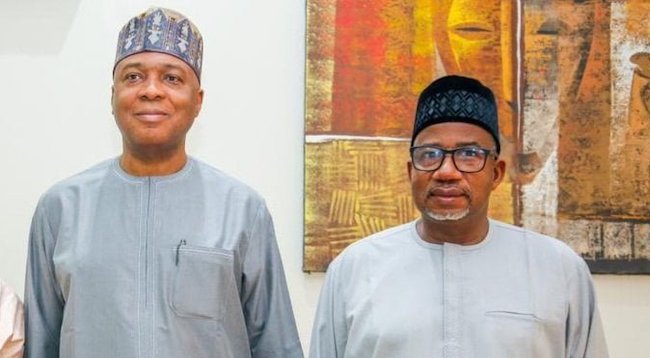 The former Vice-Chancellor of the Ahmadu Bello University (ABU), Prof. Ango Abdullahi, disclosed this to journalists in Minna, Niger State.

Abdullahi, who is the Chairman of the consensus committee put together by elders from the North, presented the committee’s report to former President Ibrahim Babangida in Minna.

Saraki, Mohammed, the Sokoto State Governor, Aminu Tambuwal, and Mohammed Hayatu-Deen have been pushing for a consensus candidate among the presidential candidates from the North ahead of the Peoples Democratic Party (PDP) primary election slated for May 29.

He said Saraki and Mohammed were picked after consultations by the elders.

The elder statesman urged the duo to work together and choose the most suitable person between them as consensus candidate.

He said: “We have resolved that Governor Bala Mohammed from the North-East and former Senate President, Bukola Saraki, from the North-Central be presented as the northern consensus candidates for the moment.

“The successful aspirants are hereby urged to work together to make allowance for further consultations to foster understanding among themselves and the PDP community to ensure a rancour-free primary in which all eligible candidates would be free to exercise their rights.

“I was mandated by elders from the North to come up with criteria for selecting the consensus candidate which was conducted in three stages which included candidates’ assessment, zonal assessment, and PDP previous experiences.

“In the first phase, the opinions of six distinguished persons each from the three geo-political zones were sought with regards to each of the four aspirants.

“Each of the zonal delegates was allocated two votes to choose the first and second choice making a total of 36 votes overall.

“At the end of the exercise, the results for the aspirants are as follows: Aminu Tambuwal (7), Bala Mohammed (10), Bukola Saraki (10), and Mohammed Hayatu-deen (5).

“Two members did not cast their second ballots bringing the total to 32 votes cast out of 36.

“One of the elders deferred his votes for further consultations with traditional rulers and other major stakeholders in the region.”

‘You had opportunity to reform Nigeria’s security in 8 years but failed,’ Presidency replies Obasanjo on state police