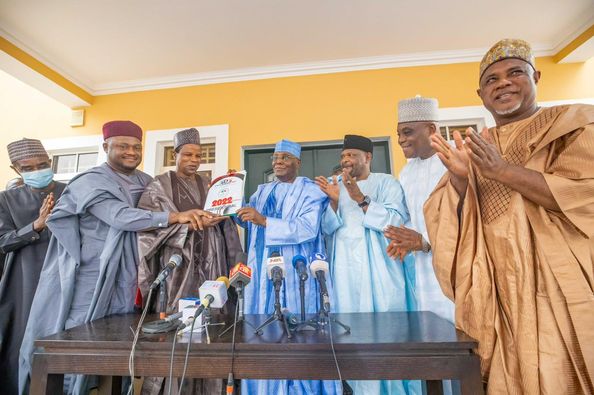 The Chairman of the forum, Alhaji Dalhatu Funakaya, presented the forms to Abubakar at his Asokoro residence in Abuja.

He said the gesture was in fulfilment of the group’s promise to foot the bill for his nomination forms.

Funakaya said: “We made a pledge in Gombe in November 2021 and we asked Abubakar to contest the 2023 presidential election and pledged to purchase nomination form for him.”

He expressed optimism that with the fulfillment of their part, Abubakar would declare his 2023 presidential election.

In his response, the former Vice President thanked the forum for the gesture and recalled how the same was extended to him for 2019 general elections.

READ ALSO: ‘Another 8 years in opposition will lead to death of PDP,’ Atiku rallies party elders as he declares 2023 presidential bid

He said: “In 2018 or 2019 some young men contributed money and bought a nomination form, the first in political history since the return of democracy to our country and truly they made me shed tears.

“They put together their hard earned money and purchased me a nomination form, that actually brought tears from my eyes. I was emotional about it.

“Now again today like the chairman of the North-East Business Forum said, we were invited and another gesture was extended to me. It was a promise. And today it is a promise fulfilled.”

INEC to decide on court’s ruling against Umahi next week