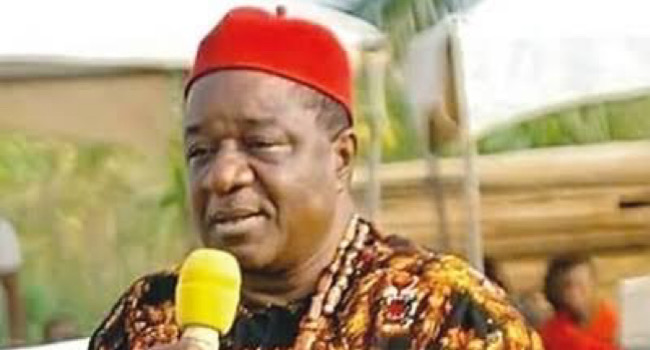 The apex Igbo socio-cultural organisation, Ohanaeze Ndigbo, on Sunday slammed its northern counterparts, the Northern Elders’ Forum (NEF) for opposing calls for political parties to zone their 2023 presidential tickets to the South-East.

In an earlier communique signed on behalf of the NEF by former Vice-Chancellor of the Plateau State University, Prof. Doknan Danjuma Shenni, the Northern elders insisted that the 2023 presidential contest should be thrown open to every region of the country to test their strength instead of zoning it to any particular region of the country.

The NEF also posited that the clamour for parties to zone their presidential tickets to the South-East was not healthy for the country as the 2023 elections approached.

But the Northern elders’ position did not sit well with Ohanaeze and in a statement issued on Sunday by its National Publicity Secretary, the group described the NEF opposition on the zoning principle as unfortunate.

Ohanaeze also accused the Northern elders of hypocrisy for opposing the zoning of the presidency to the South-East despite their criticism of the present administration for the “unprecedented insecurity, poverty, and other ills in the country.”

The statement read: “It is very strange that the elders instead of seeking a solution to the problems they have so identified, they are busy strategising on how to destroy the vital values that have helped to lubricate a precarious balance in the country.

“At about 1994, some Nigerian patriots conceived an article of faith and principle of rotation of power that guarantees equity and inclusiveness for all the diverse components of the country.

“It was also agreed that political offices will be zoned or distributed among the zones in such a way that every zone will have a sense of belonging. Furthermore, the presidency will rotate among the zones to promote peace, unity, and progress in Nigeria.

“By the rotation and zoning principle that has been in operation in Nigeria, It is only fair that the presidency be zoned to the South, specifically the South-East of Nigeria.

“It remains the moral duty of elders to guide the society on the path of truth and honour when the past no longer illuminates the future, the spirit walks in darkness.

“The NEF know full well that in the interest of peace, unity, and corporate existence of Nigeria, we the elders must, as a matter of necessity, embrace equity and justice.

“It is therefore only fair that the South-East of Nigeria should be supported to accede presidential power because what is good for the goose is, mutatis mutandis, good for the gander.

“It is also surprising that NEF is more enamored of power than the veritable and conducive environment under which sustainable national development can be attained.

“For the avoidance of doubt, there is no country on the planet earth that can progress under the dire straits and strains of inequity, injustice, mistrust, viciousness, braggadocio, and predatory ethnocentrism.

Six aspirants to vie for PDP governorship ticket in Lagos