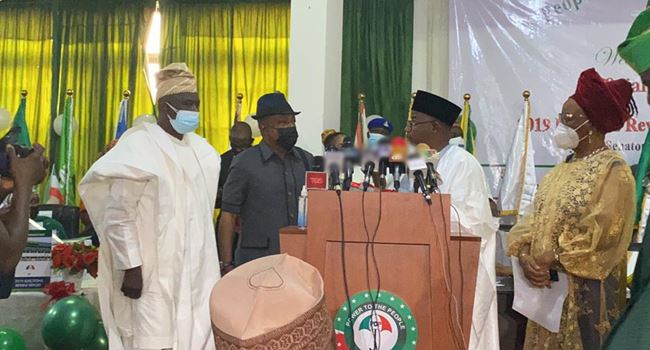 The opposition Peoples Democratic Party (PDP) may have to dump the zoning policy, and throw the race for its presidential ticket in 2023 open to everyone.

This is if the party accepts the recommendations of the 2019 Elections Review Committee, led by the Bauchi State governor, Senator Bala Mohammed.

The committee presented its report to the National Chairman of the party, Uche Secondus in Abuja on Thursday.Already, the party’s National Chairman, Uche Secondus, had while receiving the report of the committee at Wadata House, in Abuja, affirmed that the report would be implemented, noting that the party would leave no stone unturned in the fight to return to power come 2023.

If the report is adopted, the PDP would have no choice but to throw its 2023 presidential ticket open to all aspirants no matter the zone.

The Committee, led by the Governor of Bauchi State, Bala Mohammed, had resolved that the party’s presidential ticket should be awarded based on merit rather than be zone.

With other members like Senator Eyinaya Abaribe; former governor of Niger State, Babangida Aliyu, Senator Stella Omu, and Emmanuel Agbo as Secretary, the committee was constituted to study the circumstances that led to the party’s loss at the 2019 presidential polls and proffer a solution for a future victory.

In his remarks, Secondus called on President Muhammadu Buhari to embark on “immediate electoral reform” that would ensure free, fair, and transparent elections in the country.

His words: “The PDP is leaving no stone unturned to ensure it regains federal power and this report is going to be the takeoff point and keystone to our subsequent actions ahead of 2023.

“Having failed roundly in the delivery of any dividend to Nigerian people, and has brought the country to a status of a failed nation with an unprecedented collapse of all structures, the APC (All Progressives Congress) knows as a fact that Nigerians would not want to do anything with them again.

“As a result, they (APC) are putting all studs on the way to conducting credible elections. But we need to warn that the only thing keeping this country alive today is the fact that the APC will be history by 2023.

“They are aware of this reality and they are trying to use their usual propaganda to create a different image of themselves, but Nigerians know better and cannot be fooled again.

“Relying on the recommendations of this report, the NWC will work with think tanks, consultants and all critical stakeholders of our great party to enhance the new PDP narratives that will help address the yawning absence of leadership in the country.”

The report reads in part: “In line with certain unwritten conventions of the nation’s history, many people think that, for fairness and equity, the Northeast and Southeast geo-political zones that have had the shortest stints at the Presidency, should be given special consideration, in choosing the presidential flag bearer of the party for the 2023 elections.

“While we admit that this is a strong argument, we should not lose sight of the fact that Nigeria is endowed with many capable and very experienced leaders in every part of the country.

Moreover, the exigencies of the moment demand that nothing should be compromised in choosing the leader, with the attributes to disentangle the country from its present quagmire.

“Therefore, we think that every Nigerian, from every part of the country, should be allowed to choose the best candidate, through a credible primary election; as a way of institutionalising a merit-based leadership recruitment process for the country.

“Our report summarises that the party must promote practices that will deepen democracy, promote national unity and inspire greater faith in our country, especially, among the youth and the several stakeholder groups yearning for inclusion.”

Meanwhile, the committee urged the party leadership to promote internal democracy, discourage ‘godfatherism’ and ensure that the will of the people prevail, in the choice of candidates to run for electoral positions.

Earlier, the Chairman of the party’s Board of Trustees, Senator Walid Jibrin urged party members to set aside personal differences to put party interest above personal interests.

Related Topics:#featuredPDPPresidential ticket
Up Next