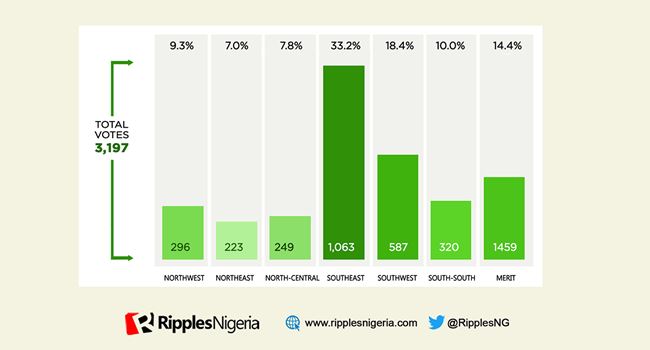 Nigerians have chosen regional and tribal sentiments over merit as the overriding considerations for who should be the country’s next president come 2023.

This emerged in a poll conducted by Ripples Nigeria, with the title ‘Which region should produce Nigeria’s next president in 2023’.

The survey had options such as Northwest, Northeast, North-central, South-south, Southwest, Southeast and Merit.

The survey, which reached over 1 million readers, had votes from about 3,170 respondents. The post was shared more than 1000 times and had over 2000 comments on Facebook.

The above numbers suggest that there is an overriding consensus among Nigerians that power should shift to the Southern part of the country with 61.1 percent of the votes, while Southeast emerged as the most favoured geopolitical zone to produce the next Nigerian president.

The result of the Ripples Nigeria survey that threw up the Southeast as the most favoured geopolitical zone may not come as a surprise to many as there have been loud agitations for the zone to produce the next president. This has seen some politicians of Igbo extraction cross carpeting from the zone’s traditional party, the Peoples Democratic Party (PDP) to the ruling All Progressives Congress (APC).

Though the agitations have been on for a long while, the question to be asked is how prepared is the ruling party, or even the PDP to handover their tickets to the Southeast?

For the APC, a presidential candidate of Igbo extraction may yet be a tall order come 2023, considering the array of formidable politicians from other zones, especially the Southwest who are believed to be eyeing the presidency. It is equally believed that some other top politicians in the Northwest and Northeast are eyeing the slot under the platform of the APC.

Another troubling question the Southeast APC bloc must consider is the preparedness of politicians in their fold for the nation’s top office. As at the last count, it is hard to point to anyone from the Southeast in APC who could be said to be prepared or positioning to take up the challenge, neither do they appear to have the reach and clout to command the needed support and loyalty of politicians from other zones to queue behind them.

The same thing goes for the PDP, except for Dr. Peter Obi, the vice presidential candidate of the party in the 2019 general elections. But he may not yet find getting the ticket easy, as feelers suggest that top politicians from other zones, including former Vice President Atiku Abubakar, may still go for a shot at the presidency come 2023.

The current feeling of entitlement by agitators of power shift to the Southeast may not be enough to sway other zones into relinquishing their bids for the presidency on a platter of gold, except concrete steps are taken to convince other Nigerians why the zone deserves it.

Another question that the Southeast needs to urgently find an answer to is, will the Southwest let go this time and allow an Igbo man pick the ticket of the ruling party?

As it stands at the moment, the Southwest appears as the most prepared zone in the South to achieve its quest for the presidency, if the APC decides to give the Southern part of the country the 2023 slot. The zone’s party stalwarts look to be deeply entrenched, while its leaders are much more visible in APC’s power play.

A sad reality the result of the poll has thrown up is the relegation of merit in choosing who gets what in favour of tribal/regional sentiments. This has been a major drawback in the nation’s democratic experience.

Right from 1999, when the nation returned to constitutional democracy, merit has always taken the back seat. Starting with former President Olusegun Obasanjo, his emergence owed largely to the Yoruba tribe wanting to be compensated for the ‘injustice’ done them with the annulment of the June 12 presidential election.

For Umar Musa Yaradua, it was the same tribal/regional sentiment and the need for power to shift to the North after the South had stayed in power for eight years. Then came Goodluck Jonathan, who had to be rallied round and supported because the nation’s cash cow, the South-south must be given a shot at the presidency.

Though the election of President Muhammadu Buhari is seen as the result of a popular movement, power shift to the north was also hinged on tribal/regional sentiments.

The question on the lips of many conscientious Nigerians is, how long will the country continue to sacrifice merit on the alter of regional/tribal sentiments? Can Nigeria’s democracy ever grow beyond the level it is at the moment?

These are questions that need urgent answers if Nigeria hopes to achieve its ambition of joining the developed world and leave behind the current experimental leadership by error.

Our polls have proven over time to be a veritable and consistent tool in gauging the pulse of the nation with near perfect results.

In the run up to the 2019 general elections, we conducted a poll titled – Ripples Nigeria Poll – 2019: Who would you vote?

It ran for several weeks, reaching about 909,463 viewers and was shared by 2,448 persons, with over 29,000 comments on Facebook alone. The poll returned President Muhammadu Buhari of the APC as winner with 54.6 per cent, while Abubakar Atiku of the PDP came second with 41.2 per cent.

In the actual presidential ballots result announced by the Independent National Electoral Commission (INEC), Buhari secured 55.6 per cent of total votes cast across the country, while Atiku got 41.2 per cent of the votes, a near perfect match to Ripples Nigeria survey.