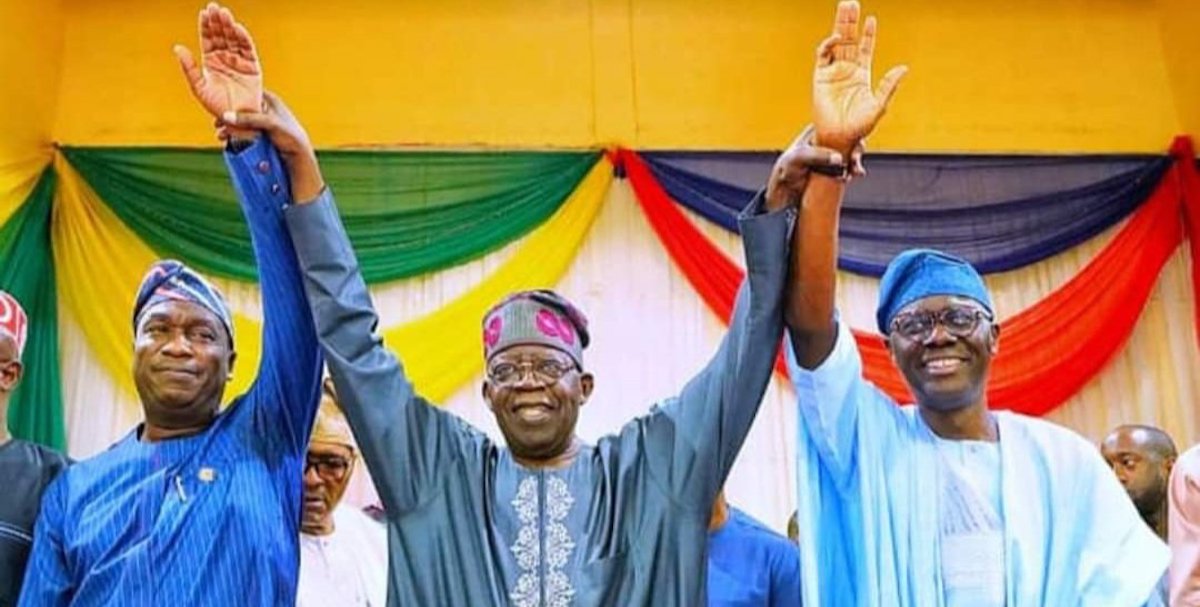 The All Progressives Congress (APC) National Leader, Bola Tinubu, on Friday endorsed the Lagos State Governor, Babajide Sanwo-Olu and his deputy, Dr. Obafemi Hamzat, for a second term in office.

At an APC stakeholders’ meeting in Ikeja, Tinubu endorsed Sanwo-Olu and Hamzat for another term of four years in office by raising the duo’s hands to the admiration of those present at the forum.

He said the governor and his deputy had established an unbreakable team to raise the bar of excellence in governance and service delivery in the state with tangible results and progress to show for it.

According to him, the duo’s accomplishments won them the chance to run for a second term, rather than a blanket endorsement that many politicians seek.

Tinubu, a presidential candidate on the APC platform, said Lagos had remained a source of pride for residents and other Nigerians who desired responsive administration and progress under Sanwo-Olu’s leadership.

He said: “We have a brilliant governor at the helm of affairs, who is supported by his deputy to build an unbreakable team that has raised the bar of excellence in governance in Lagos. I specially thank Dr. Hamzat, who has been a very good assistant and a pillar of support to the governor.

”Sanwo-Olu with Hamzat has raised an impenetrable team. I commend both of you and all members of the cabinet. You have all done wonderfully well and I must say that I am very proud of you.”

In what appeared like a thinly veiled jibe at the former state governor, Akinwunmi Ambode, who is reportedly eyeing a return to the seat he vacated in 2019, the APC leader said the party would not prevent any aspirant from vying for any position or testing their strength at the primaries in the state.

He said that all candidates that would be fielded by the party across must go through a delegate electoral system.

Tinubu added: “Aspirants who are showing interest in positions from House of Assembly to the governorship, go and get your forms; you are going to contest primaries. There will not be any favouritism in the primaries.

“We want you to contest and test your popularity. Nobody will ask you to step down for another aspirant. Let all aspirants mobilise their supporters; if you win, you win. If you lose, there will not be a refund of the nomination form.”