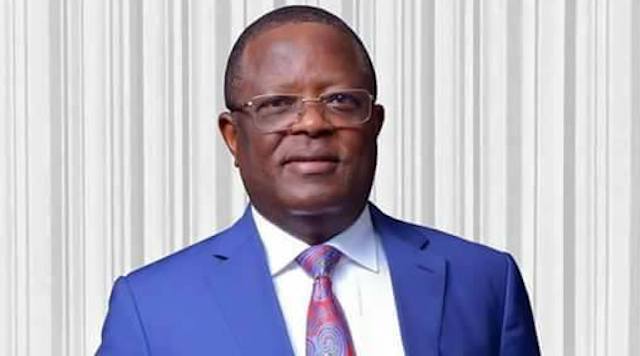 Umahi, who addressed the State House correspondents at the end of the meeting, said he was in the seat of power to invite the president to inaugurate the new Ebonyi State Governor’s Lodge recently completed by his administration.

He said the president has accepted the invitation, adding that the project would be inaugurated in October.

The governor said: “I build mind-blowing projects to let, first and foremost, our brothers and sisters in the South-East know Ebonyi State has come of age.

“So, I built that project for people like you, to assure you that we went to the same school, that we have the same brain and that we’ve come of age and that nobody should neglect Ebonyi State again.

“And to some people, we use it to punish them, those who neglect us are being punished by this gigantic project and my projects are projects you can’t find anywhere in the South-East.

“You can crosscheck that. So, it’s for punishment.

READ ALSO: Umahi files lawsuit against Agom-Eze in wake of senatorial primaries
”The benefit is to instill confidence in our people, to make our people number one in everything we do.

Umahi also predicted victory for the All Progressives Congress (APC) in the 2023 presidential election.

He, however, picked the Labour Party candidate, Peter Obi, as his second favourite.

The governor stressed that the current political movement projecting Obi would go a long way to prepare the ground for the realization of an Igbo president in the future.

He added: “What happened during the primaries of Peoples Democratic Party (PDP) and APC were a kind of miscalculation by our people, but to say whether they’re ready for the presidency of the country anytime, I think that the movement of Peter Obi is an eye opener and that’s why I said I love what he’s doing.

“So, while my party takes the victory, he would have prepared a very good ground for the South-East presidency, so that nobody is going to write us off and you can see the level of his acceptability, which does not translate to victory over APC. I’m sure of that.”