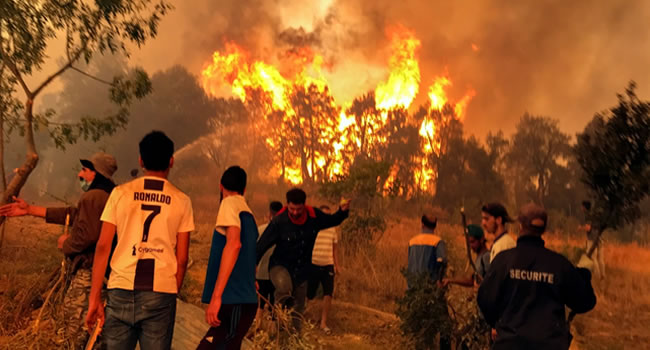 Twenty-two people have been arrested by the police in Algeria on suspicion of being behind the most devastating wildfires in the country’s history that killed 69 people, including soldiers who were on a rescue operation.

The suspected arsonists were rounded up on Friday after dozens of forest fires hit mountainous areas in northern Algeria since Monday, mainly in Tizi Ouzou of the Kabylie region east of the capital, Algiers.

“Some fires have been caused by high temperatures but criminal hands were behind most of them.

“We have arrested 22 suspects, including 11 in Tizi Ouzou. Justice will perform its duty.

28 soldiers were among the dead as the North African country deployed the army to help firefighters contain blazes that ravaged houses in forested areas.

Tebboune added that a “solidarity fund” will provide some financial aid to families affected by the fires, which have destroyed homes, olive groves and animals that provide livelihoods in the region.

Prime Minister Aimene Benabderrahmane, who visited Tizi Ouzou on Thursday, the regional capital of Kabylie, said “for the moment, the most important is to extinguish the fires and above all, to take care of the population.”

Algerian authorities have struggled to contain the fires which have since spread to several other provinces.

The country’s National Meteorological Office said extremely hot weather was forecast through Thursday in nearly a dozen regions, including around Tizi Ouzou. In some places, the temperature was expected to hit 47C.