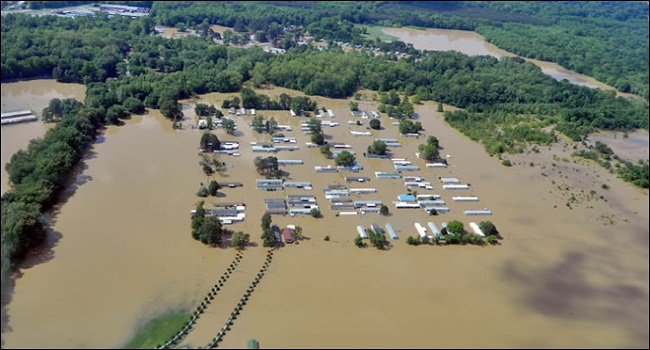 Not less than 22 people have been killed, with more than 50 declared missing after an unprecedented rainstorm pounded the city of Tenessee in the United States, over the weekend.

The flash flood emanating from the torrential rainfall reportedly shattered homes, as dozens of people are not accounted for in what has been described as record-breaking, sending floodwaters surging through the state.

Emergency officials reported on Monday that flooding in rural areas took out roads, mobile phone towers, and telephone lines, leaving families uncertain about whether their loved ones survived the unprecedented deluge.

Many of the missing live in the neighbourhoods where the water rose the fastest, said Humphreys County Sheriff Chris Davis, who confirmed the 22 fatalities, with the names of the missing posted on a board in the county’s emergency centre and listed on a city department’s Facebook page.

The dead included twin babies who were swept from their father’s arms, according to surviving family members and a foreman at county music star, Loretta Lynn’s ranch.

A series of storms moved over the area for hours at the weekend, wringing out a record amount of moisture, a scenario scientists have warned may be more common because of global climate change.