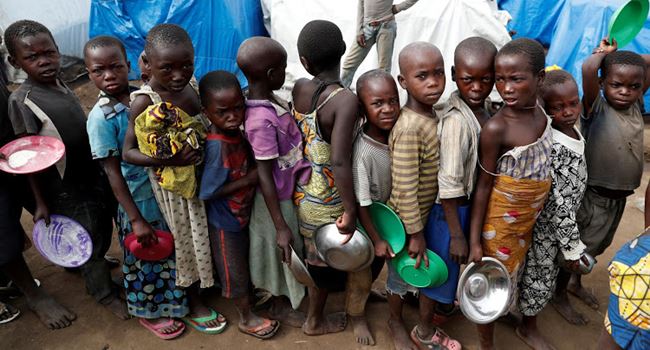 The United Nations (UN) has informed that no fewer than 22 million people in the Democratic Republic of Congo are facing acute food shortage, in a dramatic rise from last year.

In a statement issued on Thursday, the UN said conflict and effects of the Covid-19 pandemic, which have affected food prices and livelihoods, have worsened the problem in the country.

“The number of people facing acute food insecurity at crisis or worse levels has dramatically increased – from 15.6 million in 2019 to 21.8 million,” the UN’s Food and Agriculture Organisation says in a report.

“These factors are exacerbating humanitarian needs and the country is now the world’s largest food crisis,” the report by the UN says.

The report by the UN also cites “an economic decline linked to currency depreciation and drop in GDP growth and natural hazards”, such as flooding, as contributing to the crisis.

The UN agency says the food shortage is particularly difficult for internally displaced people and returnees “who often return to their area of origin and find themselves without the means to resume their livelihood”.

Buhari is a failure; he should resign and beg for forgiveness –Lamido