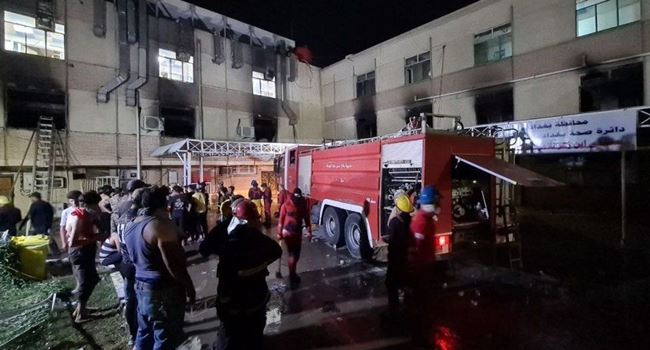 Not less than 24 people have been killed in a massive fire that engulfed a hospital in Baghdad, the Iraqi capital on Saturday night after oxygen tanks exploded.

An Iraqi health official who confirmed the incident said at least 34 others were also wounded in the fire which occured at the Ibn al-Khatib Hospital.

“Civil defense teams are still at the scene of the accident, investigating the causes that led to this fire, which caused the loss of the lives of many patients and their companions,” a statement released by Iraq’s Health Ministry on Sunday reads.

The ministry said health workers and civil defense teams were able to save at least 200 people including patients, and will have an exact number of those killed and wounded at a later time.

Social media videos showed a chaotic scene as firefighters scrambled to put out the blaze and health workers tried to evacuate patients at the hospital.

Iraqi Prime Minister Mustafa al-Kadhimi who sent his condolences to the victims of the Baghdad hospital fire, has ordered an immediate investigation, according to his office.

Meanwhile, the Independent High Commission for Human Rights of Iraq (IHCHR) has called on the Iraq government to take a “responsible position” following the hospital fire.

The IHCHR called the incident a “crime against patients who were forced by the severity of the disease as a result of Covid-19 infection to be hospitalized,” in a statement issued Sunday.

Related Topics:Baghdadfirehospital fire
Up Next