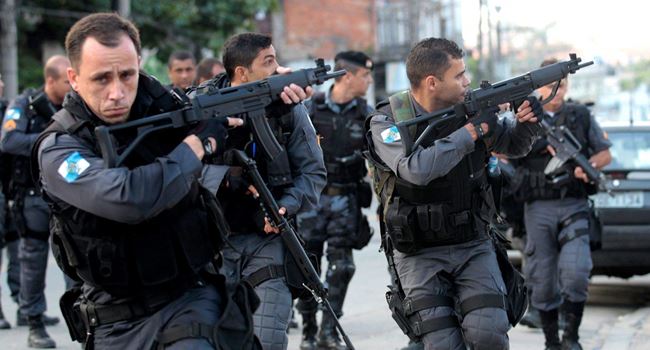 Not less than 25 people have been killed in Brazil after hundreds of heavily armed police operatives stormed into one of Rio de Janeiro’s largest slum areas in a crackdown on drug traffickers.

Local media described the massacre as one of the deadliest police raids in the history of the country and showed live footage of seven armed young men hopping through the roofs of North Zone’s Jacarezinho favela on Thursday as bulletproof helicopters hovered over them.

The report said the “extremely suspicious criminals” were attempting to escape from the police leading to the officers opening fire on the slum. Two passengers on the metro were hit by a stray bullet and one police officer was killed.

Videos and photos shared later by residents showed grenade explosions, as well as horrific scenes of corpses lying in corridors, multiple bullet holes on residents doors, blood-stained mattresses and clothes and blood flowing down staircases in the favela’s narrow alleys.

The Brazilian media widely applauded the operation, saying the raid was justifiable as drug trafficking and other violent crimes had caused a lot of havoc in the community.

However, human rights activists, residents and public security specialists were horrified and said that the attack could have been motivated by other factors.

“Never in my life have I seen a police operation as lethal as this,” Bruno Soares, a researcher from Rio’s Centre for Studies on Public Security and Citizenship said.

“The police officer was killed before 9am in the morning, this could have influenced the number of deaths with the police invading with more force,” added Soares, who was born and raised in the Jacarezinho favela.

“One of the men asked to hide in my home. When the police came, I told them that there was someone here, as they would have come in anyway. They went to my daughter’s room and shot him instantly,” said one favela resident in a video shared on social media.

Joel Luiz Costa, a lawyer and resident of the favela whose team visited multiple houses after the shootings took place, called the operation “cruel” and “barbaric” in a video posted on social media. He said there were clear signs of “execution-style killings.”

Though media reports said the Public Ministry had approved of the operation, Soares claimed that the ministry only received information of the operation three hours after it began.

Related Topics:brazilRio de Janeiro
Up Next

French journalist kidnapped in Mali cries for help in video