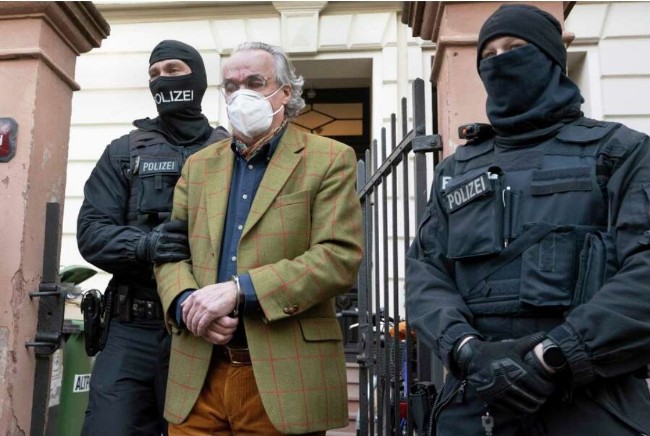 Thousands of police officers, on Wednesday, conducted raids on accused far-right radicals who were allegedly planning an armed takeover of the government over much of Germany. 25 persons, according to officials, were detained.

According to federal prosecutors, 130 locations across 11 of Germany’s 16 states were searched by 3,000 officers. The size of the operation was extraordinary, even though police operations targeting the extreme right are not uncommon in the nation, which is still sensitive to its dreadful Nazi past.

The raids were a “anti-terrorism operation,” according to Justice Minister Marco Buschmann, who also suggested that the suspects may have plotted an armed attack on government facilities.

Prosecutors said the suspects were linked to the so-called Reich Citizens movement, whose adherents reject Germany’s postwar constitution and have called for bringing down of the government.

German media outlet Der Spiegel reported the searched locations included the barracks of Germany’s special forces unit KSK in the southwestern town of Calw. The unit received scrutiny in the past over alleged far-right involvement by some soldiers.

Prosecutors claimed that in addition to detentions in Germany, one individual was held in the Italian city of Perugia and another in the Austrian town of Kitzbuehel.

According to prosecutors, individuals who have been detained are accused of forming a “terrorist organization” last year with the intention of overthrowing the German government and replacing it with one that was already in the process of being established.

Prosecutors further asserted the accused were aware that using force and military methods was the only way to accomplish their goals.

Some of the group’s members had made “concrete preparations” to storm Germany’s federal parliament with a small armed group, according to prosecutors. “The details (of this plan) still need to be investigated” to determine whether any of the suspects can be charged with treason, they said.

The group is alleged to have believed in a “conglomerate of conspiracy theories consisting of narratives from the so-called Reich Citizens as well as QAnon ideology,” according to the statement.

Prosecutors added that members of the group also believe Germany was ruled by a so-called “deep state;” similar baseless claims about the United States were made by former President Donald Trump.

Prosecutors identified the suspected ringleaders as Heinrich XIII P. R. and Ruediger v. P., in line with German privacy rules. Der Spiegel reported that the former was a well-known 71-year-old member of a minor German noble family, while the latter was a 69-year-old former paratrooper.

Federal prosecutors said Heinrich XIII P. R., whom the group planned to install as Germany’s new leader, had contacted Russian officials with the aim of negotiating a new order in the country once the German government was overthrown. He was allegedly assisted in this by a Russian woman, Vitalia B.

Wednesday’s raids showed that “we know how to defend ourselves with full force against the enemies of democracy,” Interior Minister Nancy Faeser said.

“The investigation offers an insight into the depths of the terrorist threat within the Reich Citizens milieu,” Faeser said. “Only the further investigation will provide a clear picture of how far the coup plans had come.”

Officials have repeatedly warned that far-right extremists pose the biggest threat to Germany’s domestic security. This threat was highlighted by the killing of a regional politician and the deadly attack on a synagogue in 2019. A year later, far-right extremists taking part in a protest against the country’s pandemic restrictions tried and failed to storm the Bundestag building in Berlin.

Related Topics:Germany coup
Up Next